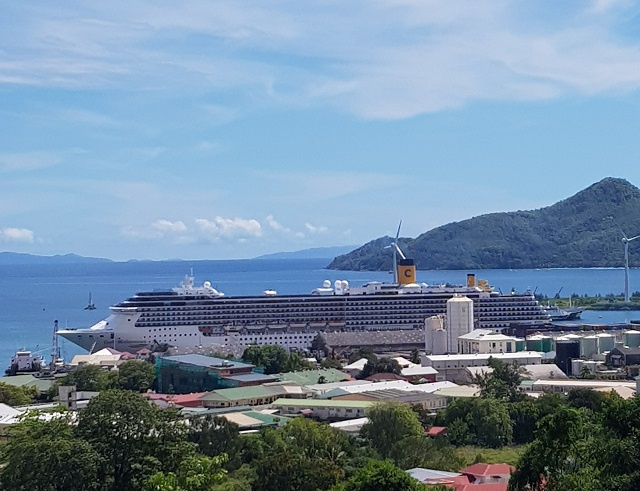 One of the Costa Cruises vessels in the Seychelles' Port Victoria in October this year. (Betymie Bonnelame)

(Seychelles News Agency) - The news that Costa Cruises is pulling out of the Indian Ocean region will have minimal impact on visitor arrivals in Seychelles, a top tourism official said.

Costa Cruises has announced it will stop operating in the region as of March.

"In terms of visitor's arrival figures, the effect of Costa Cruises stopping its activities in the Indian Ocean would be minimal for Seychelles. This is because passengers disembarking from a cruise ship do not add to the numbers unless the same passengers stay one night on land," the chief executive of the Seychelles Tourism Board, Sherin Francis, told SNA.

Francis further explained that the mode of transport for most visitors to Seychelles is mostly by air.

"Arrivals by sea from January to November 2019 equals to 8,902, representing approximately three percent of travellers to Seychelles," added Francis.

However, the absence of Costa Cruises during the cruise season, which normally runs from October to April, is expected to be felt by some businesses. These include taxi drivers, tour operators, restaurants as well as street vendors especially those specializing in souvenirs and curio items.

Francis confirmed that some discussions have started on this issue amongst the different partners of the Vanilla Islands.

The Vanilla Islands group is an affiliation of the island nations – Seychelles, Madagascar, Reunion, Mauritius, Comoros, Mayotte in the Indian Ocean -- to form a new travel destination brand.

"It is clear that the decision made by Costa Cruises will have some impact on a few businesses in revenue performance next year. There are few local businesses which concentrate some part of their activities around the cruise ships season," said Francis.

Paquerette Lablache, who owns a shop selling local crafts and clothing, said this will have little impact on her business.

"These visitors do not come to the shop and the only interaction I have with them is at the bazaar labrin at Beauvallon but even there they rarely by anything," said Lablache.

France Annacoura, who offers guided tours, said, "these people ask for our price, they bargain a lot and most of the time even when our price is very low, very few of them actually takes a tour."

On the contrary taxi operator, Jean Claude Samson, told SNA that Costa's withdrawal from Seychelles – 115 islands in the western Indian Ocean - will be felt by taxis as well as omnibus operators.

"There are so many taxis here, that even the little we get from visitors from cruise ships is always something, and yes we will feel the impact," said Samson.

It was in October that Saint Ange Tourism Report made the announcement that Costa Cruises is dropping Seychelles and the Indian Ocean Region from its cruises.

This was at a time when the tourism industry was still reeling from the shock that one of the world's oldest tour operator, Thomas Cook, declared bankruptcy.

SNA also contacted the Seychelles Ports Authority to know the extent of loss in revenue for the authority, but received no official response.

However, sources informed the agency that the Ports Authority had not received any official communique with regards to Costa's decision.