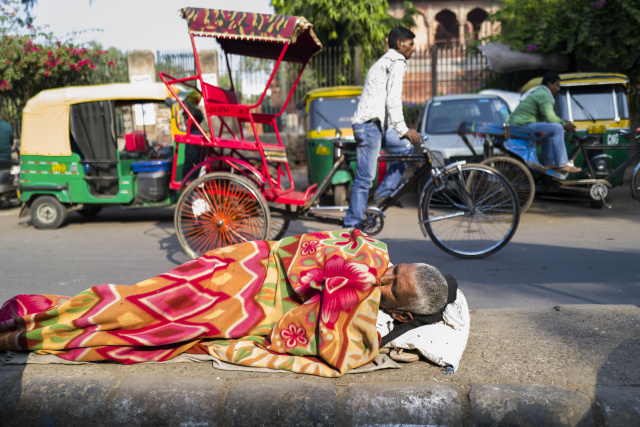 A man takes a nap laying on a road divider in the old quarters of New Delhi on November 29, 2019. (Jewel SAMAD / AFP)

(AFP) - A key World Bank fund dedicated to lifting countries out of poverty has received a record $82 billion in funding and pledges for the next three years, its president said Friday.

This represented a $7 billion (6.3 billion euro) increase on the previous three-year term, and is "the largest-ever replenishment" of the International Development Association (IDA), said World Bank chief David Malpass.

"Today's commitment by our partners is a strong sign of their support for the urgent mission to end extreme poverty and promote shared prosperity in the poorest and most vulnerable countries," Malpass said during a conference call.

"It will also help countries deal with the challenges posed by climate change, gender inequality, and situations of fragility, conflict, and violence, including in the Sahel, the Lake Chad region, and the Horn of Africa," he said.

Seventy-four countries are to benefit from the funding, with $53 billion of the new funds earmarked for Africa, he added.

Created in 1960, the fund has long relied solely on contributions from wealthy countries, but since 2017 it has issued bonds to investors to finance its work.

The new funds came from contributions by 52 governments, supplemented by the money raised on financial markets. It makes grants or low-interest loans available to countries in need.

Pandemic could push 115 mn into extreme poverty in 2020: World Bank