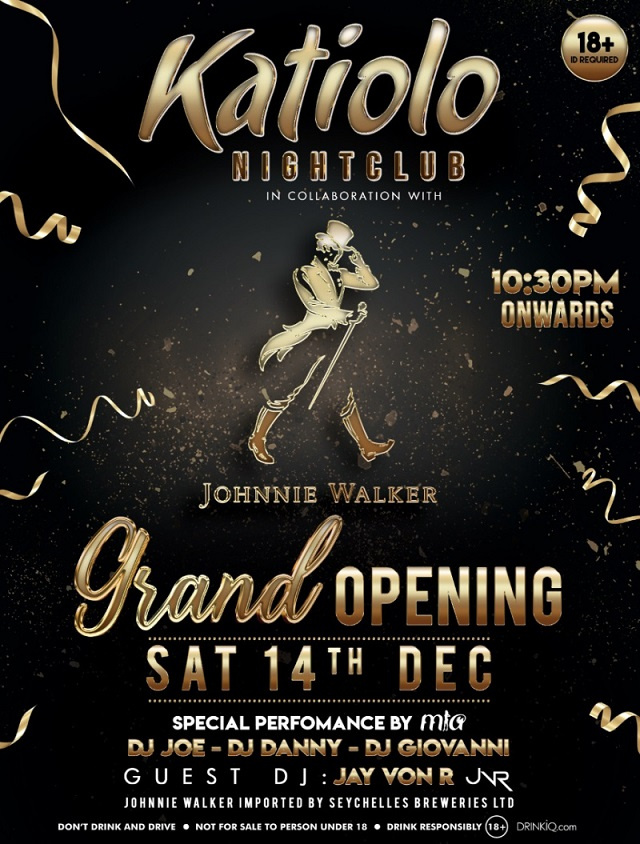 The nightclub located at Anse Faure in the district of Anse Aux Pins will re-open to patrons on Saturday. (Seychelles Nation)

(Seychelles News Agency) - One of Seychelles' popular entertainment establishments -- Katiolo Nightclub -- which closed nearly two years ago after its owner passed away, will reopen on Saturday.

The nightclub, located at Anse Faure in the eastern Mahe district of Anse Aux Pins, closed on October 22, 2017, the day its owner, Simon Esparon, died at age 67 following a break-in at his home, located on the other side of the road from the establishment.

His children, Brigitte and David Esparon, have taken over the place which will welcome its first patrons on Saturday.

Brigitte Esparon told SNA that during the time the nightclub was closed, her siblings and herself carried out major renovations on the building.

"We wanted to keep the traditional Creole architecture which gives the place its authenticity. At the same time we have combined the old with the new for example by using lights in the wood structures to give it a more modern feel," she said.

She added that the establishment still has its trademark thatched roof and local wood.

Esparon who has around nine years of experience in running such a business told SNA she learned the ropes from her late father and the Katiolo discotheque remains a family run business.

Patrons will pay from SCR100 ($7) for ladies and SCR150 ($11) for men to access the premises and Esparon said they have a pool of popular DJs to entertain guests on Wednesday, Fridays and Saturdays. They plan to host big events as well on Fridays.

She said they will be paying special attention to the patrons' attire. Customers are being asked to dress smart and elegant as they want to maintain a high standard.

The nightclub has a capacity of 600 people and for its grand re-opening Esparon said the place is nearly fully booked.

"The response has been overwhelming and we are happy to welcome back our clients and hope they are satisfied with what we've done to the place and we look forward to seeing them," said Esparon.

Apart from structural renovation, other improvement includes the introduction of short-range speakers to reduce noise pollution which Esparon says "is out of respect for our community."

"We also have a zero-tolerance for noise in our car park and we will be very strict with those who play loud music in their cars outside the nightclub," she added.

Katiolo opened its doors in 1974 and is one of the oldest nightclubs in Seychelles. It was run by Simon Esparon until his death in 2017.

The Creole name Katiolo means a makeshift boat, an apt name for the establishment which is located by the beach at Anse Faure in the eastern part of Mahe.