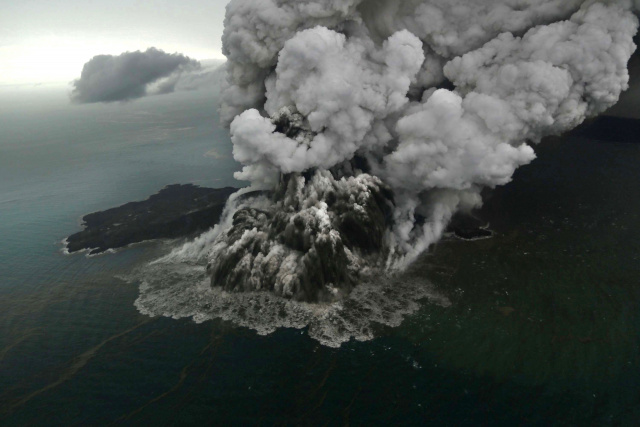 (FILES) This file photo taken on December 23, 2018 by Bisnis Indonesia shows Anak Krakatau volcano erupting in the Sunda Straits off the coast of southern Sumatra and the western tip of Java. Huge chunks of an Indonesian volcano litter the seabed after its eruption and subsequent collapse in December 2018 sparked a deadly tsunami, according to new research. The marine survey imagery shows parts of the strait between Java and Sumatra islands covered with triangular-shaped boulders from the Anak Krakatau volcano, some as high as 90 metres(295 feet). (Nurul HIDAYAT / BISNIS INDONESIA / AFP)

(AFP) - Huge chunks of an Indonesian volcano litter the seabed after its eruption and subsequent collapse last year sparked a deadly tsunami, according to new research.

The marine survey imagery shows parts of the strait between Java and Sumatra islands covered with triangular-shaped boulders from the Anak Krakatau volcano, some as high as 90 metres (295 feet).

The crater partly collapsed after its December 22 eruption with parts of it sliding into the ocean and triggering deadly waves that killed more than 400 people and injured thousands.

The Anak Krakatau volcano emerged at the site of the legendary Krakatoa volcano, which was destroyed after a massive 1883 eruption that killed at least 36,000 people.

The 2018 disaster struck without warning, washing over popular beaches and inundating tourist hotels and coastal communities, leaving a trail of death and destruction in its wake.

Debris from the volcano is spread as far as 2,000 metres from where it collapsed, according to new research presented at the American Geophysical Union's meeting in San Francisco last week.

Using what's known as multibeam echosounder bathymetry, an international team including members of the British Geological Survey, National Oceanography Centre and several US and British universities mapped the seabed with sonar technology.

"Tsunamis generated by very small volume landslides from active volcanoes such as Anak Krakatau have the potential to devastate local coastlines and their communities", David Tappin from the British Geological Survey told AFP.

In the team's earlier study, which included work by Stephan Grilli at the University of Rhode Island, it said the disaster offered a rare look at tsunamis sparked by volcanic eruptions, rather than more common undersea earthquakes.

The 2018 tsunami was Indonesia's third major natural disaster in six months. It followed a series of powerful earthquakes on the island of Lombok and a quake-sparked tsunami in September that killed around 2,200 people in Palu on Sulawesi island, with thousands more missing and presumed dead.

"The event really demonstrates the very real hazard from non-seismic tsunami mechanisms, and together with the Palu tsunami of September 2018, should be a catalyst for improved warning of and mitigation from these events," Tappin said.

Next week marks the 15th anniversary of the 2004 Boxing Day tsunami, which killed some 220,000 people in countries around the Indian Ocean, the majority in Indonesia.

That tsunami -- one of the deadliest natural disasters in history -- was generated by a massive, 9.3-magnitude quake which struck undersea off the coast of Sumatra.

Volcano-dotted Indonesia, a vast Southeast Asian archipelago, is one of the most disaster-hit nations on Earth due to its position straddling the so-called Pacific Ring of Fire, where tectonic plates collide.