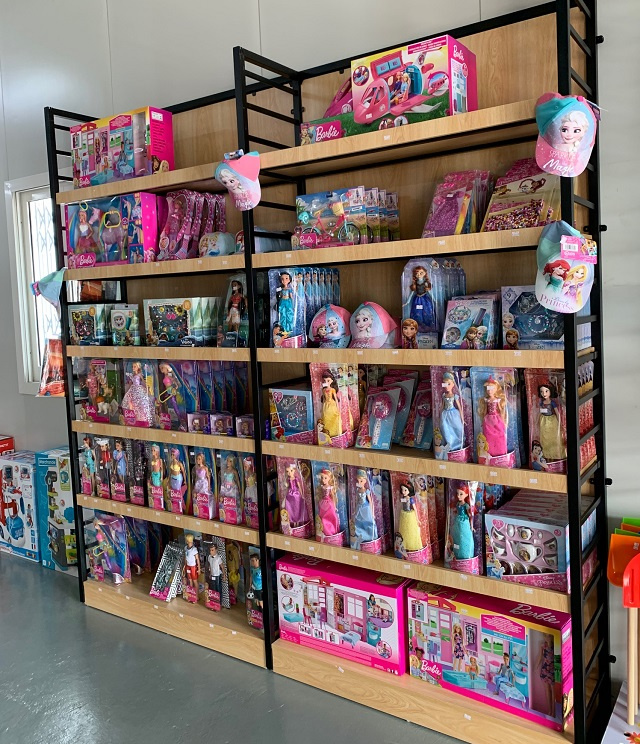 (Seychelles News Agency) - It's almost like Santa and his elves opened a satellite workshop in Seychelles just in time for Christmas.

Kids Factory is a new store that opened in Seychelles' capital city of Victoria earlier this month that offers quality toys for all ages.

The store is located at the 'Paradis des Enfants' playground, the same location where the skating rink was once found.

In an interview with SNA on Wednesday, the store's owners Vivian Rassool, his wife Loréa Rassool and brother-in-law Jonas Dewals, said they decided to open the store after having trouble finding toys in Seychelles for their children.

"It is always a nightmare to find presents for birthdays, Christmas and other special occasions and that is when we decided that because it is such a problem for us, why not try and find a space to sell toys in," said Loréa.

Kids Factory has toys for infants, toddlers, pre-schoolers, kids, teenagers, and even adults.

One can find stuffed toys, dolls, action figures, board games, puzzles, construction toys, costumes, activity toys among many others. The store has a whole wall of shelves dedicated to water-related sports and recreational activities.

"We are in Seychelles and most of the time we play at the beach so we have a lot of beach stuff from goggles, spades, inflatable beach or pool mattresses, masks, snorkels. Everything," said Vivian.

"Our concept is to bring in toys that last. We do not want to bring in the very poor-quality toys which you have to sell for cheap. You will find our prices are slightly more expensive than other stores but that is because the quality of the toys is of European standards, coming from France," said Vivian.

Loréa added that "everything we import is from France although you will see that they are made in China."

"Obviously China exports to different markets of European, American or sub-standards. Perhaps later we will try to go to China ourselves and source straight from the suppliers, and hopefully, by doing so, we will be able to bring down the prices," explained Vivian.

Walking among the 14shelves of the open-plan store, one will find toys ranging from $1.45 to over $145. A wide variety of wrapping papers and gift bags are also on sale for the packaging of the goods.

Vivian told SNA that he and his team placed a lot of dedication in the setting up of the store, working late hours for over five weeks so as to open the doors to the public before Christmas.

"We said "let us start with toys because it's Christmas and most kids want toys for Christmas.' Then we will see if we can diversify a bit by bringing in maybe children clothes and books. We want to be a one-stop-shop for parents where they come to one place and find everything. This is a long-term project and we want to see it last," said Vivian.

Vivian said that more toys have been ordered but due to it being the festive season and the fact that there are delays for shipments to get to Seychelles, the goodies might not make it on the shelves before Christmas. They will, however, be available for other occasions - birthdays are celebrated all year-round after all.