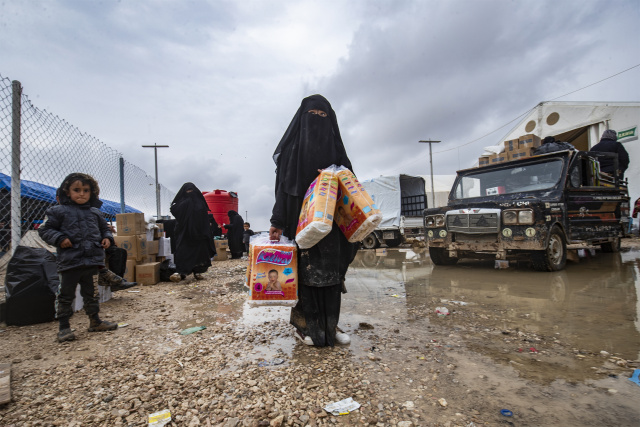 A girl carries diapers packages at the Kurdish-run al-Hol camp for the displaced where families of Islamic State (IS) foreign fighters are held, in the al-Hasakeh governorate in northeastern Syria on December 9, 2019. Around 200 Syrian displaced people, mostly women and children, were heading home from an overcrowded desert camp in the northeast of the war-torn country on December 8, a Kurdish official said. The majority were civilians with no ties to IS, he said, while a few might have aligned with the jihadists but today regretted their decision. (Delil SOULEIMAN / AFP)

(AFP) - Russia and China used their vetoes Friday to block a UN Security Council resolution that would have extended for a year cross-border humanitarian aid to four million Syrians.

Humanitarian aid currently flows into Syria through UN-designated checkpoints without the formal permission of the regime in Damascus, but that authority is due to expire on January 10.

Germany, Belgium and Kuwait presented a resolution extending that authority for a year, winning the support of 13 council members but drawing the vetoes of Russia and China.

A competing Russian resolution that would have granted a six-month extension while reducing the number of UN crossing points was rejected, having failed to get the minimum nine votes.

Russia is a close ally and major supporter of Syrian President Bashar al-Assad, and has used its veto 14 times on Syrian issues since the start of the civil war there in 2011.

Russia's ambassador to the United Nations, Vassily Nebenzia, said the latest resolution was "obsolete" because the authorities in Damascus have "retaken control of most" of Syria's territory.

But the UN humanitarian relief department says the aid remains crucial as the situation on the ground has deteriorated over the past year and Syria is heading into winter.

"I am in a state of shock," Kelly Craft, the US ambassador, said after the Russian and Chinese vetoes.

"Today we took a huge step backwards in credibility where it really matters," she said.

"I am deeply and profoundly disappointed at the outcome of today's meeting."

The latest resolution failed just as tens of thousands of civilians flee the northwestern Idlib region due to heavy bombardments by Assad's government, backed by Russia, in the last bastion of the jihadist opposition.

The text vetoed Friday called for a one-year extension of the authorization to ship humanitarian relief supplies into Syria -- in effect since 2014 -- through three checkpoints, two in Turkey and one in Iraq.

Hoping to overcome Russian opposition, the resolution's sponsors on Wednesday dropped a request for a fourth point of entry on the Jordanian border, which has hardly been used since 2018.

Earlier in the week, Russia offered a competing draft resolution calling for a six-month extension, but only via the two Turkish checkpoints.

Put to a vote Friday, that proposal was rejected, with the United States, France, Britain, Poland, Peru and the Dominican Republic voting against. Germany, Belgium, Kuwait and Indonesia abstained.

"If you're so concerned about Syria, then why didn't you vote in favor of the Russian draft?" said the Chinese ambassador, Zhang Jun.

But the British envoy, Karen Pierce, said that the vetoes showed an unwillingness to help Syrians.

"There is time to sort it out if everybody is willing to do so," she said.

"I found the crocodile tears from the Russians and Syrians about what will now happen on the ground merely yet another example of the breathtaking hypocrisy we have seen on this."

It was the second time in four months that Russia has vetoed a resolution dealing with the humanitarian situation in Syria.

In September, Moscow used its veto against a resolution calling for a ceasefire in Idlib. That resolution also was sponsored by Germany, Belgium and Kuwait.

Earlier Friday, the UN special envoy on Syria, Geir Pedersen, presented to the Security Council a grim picture as well on seeking a political solution in Syria.

A long-awaited committee to form a new constitution for Syria met in October in Geneva, but Pedersen acknowledged there was little progress.