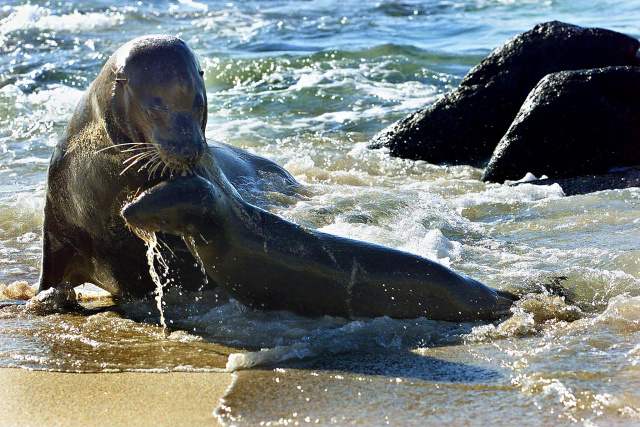 A sea lion (back) examines a fellow sea lion that died of unknown causes, on the rocky shore of Ochoa beach on San Cristobal Island in the Galapagos Islands, 28 January 2000. Environmentalists continue to monitor the situation after Ecuadoran tanker Jessica ran aground 16 January spilling more than 160,000 gallons of fuel near San Cristobal Island. Experts believe damage will be minimal to the islands' ecosystem, which contains rare and exotic animals. (AFP PHOTO/MARTIN BERNETTI)

"Not a single species has been affected by the spill in San Cristobal," the easternmost island in the chain, said Environment Minister Raul Ledesma.

He added that a team of veterinarians was onsite checking animals.

Authorities activated emergency protocols Sunday morning to contain the environmental impact of the spill in the Galapagos archipelago, a UNESCO World Heritage Site that is home to one of the most fragile ecosystems on the planet. They declared the situation "under control" later that day.

Sea lions, tortoises, birds and reptiles such as iguanas live on the islands, but "none have been affected in this incident, nor have the tourist areas," said Ledesma.

The accident, in which one person was injured, occurred in a San Cristobal port when a crane collapsed as it loaded a container holding an electric generator onto a barge.

The falling container destabilized the ship, which was carrying 600 gallons of diesel fuel, causing it to sink.

The generator and the loading crane were also submerged.

"During the night, almost the entire contaminated area was cleaned up," he said. "This morning, there was only a small oil patch that we hope to eliminate in the next few hours."