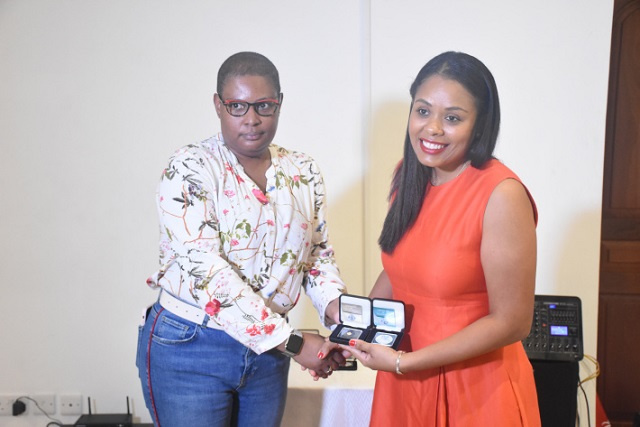 The Governor of the Central Bank, Caroline Abel (left), presented the two coins -- one gold and one silver -- Sherin Francis, who is in charge of the national preparatory committee. (Seychelles Nation)

(Seychelles News Agency) - Two new commemorative coins issued by the Central Bank of Seychelles (CBS) to mark the 250th anniversary next year since the first settlers inhabited the island nation are now available.

Last weekend the Governor of the Central Bank, Caroline Abel, presented the two coins -- one gold and one silver -- to the chief executive of the Seychelles Tourism Board, Sherin Francis, who is also in charge of the national preparatory committee.

"The coins are one of the commemorative items that will be on sale as a keepsake for the celebration. We have the chance to all be here for this celebration and we encourage the public to make good use of it," Francis told reporters.

The commemorative gold and silver coins which were manufactured by B H Mayer Mint based in Germany cost SCR900 ($66) and SCR850 ($62) respectively.

The coins depict the Coat of Arms of Seychelles, an archipelago in the western Indian Ocean, and the inscription of the value on one side. The other side is a boat representing 'Telemaque', the ship that disembarked the first 28 settlers in 1770 to start a community on the island of Ste Anne.

The idea for the commemorative coins came from the national preparatory committee for the 250th Anniversary of Seychelles, which is scheduled for August 2020.

The project was inspired by a painting done by Francesca Alexandra Azais – the ambassador of the Sovereign Order of Malta based in Seychelles. The coins were designed by Derick Baccus.

The overall maximum production for worldwide sale will be limited to 2,500 pieces for each coin. Only 250 pieces of each have been made available for sale at the Central Bank since Monday.

Also to commemorate the countdown to the 250th-anniversary celebration, the Seychelles Broadcasting Corporation will release a series of celebratory videos that will give people the opportunity to celebrate the island nation's heritage.