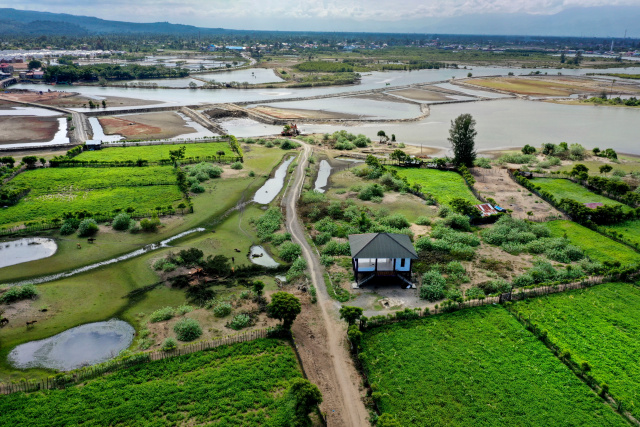 This aerial picture taken on December 11, 2019 show a general view of Lambada village, which was affected by the December 26, 2004 tsunami, in Lambada, Aceh province. On December 26, 2004, a monstrous 9.3 magnitude quake struck undersea off the coast of Sumatra. It sparked a tsunami nearly 100 feet (30 meters) high that killed more than 220,000 across a string of Indian Ocean countries, including Thailand, Sri Lanka and India. (Chaideer MAHYUDDIN / AFP)

(AFP) - Thousands of mourners flocked to mass graves Thursday in Indonesia's Aceh province to commemorate the 15th anniversary of the 2004 Boxing Day tsunami, one of the worst natural disasters in history.

On a grassy field in Aceh Besar district where at least 47,000 victims were laid to rest, family members and relatives prayed, scattered flower petals and comforted each other.

Among them was Nurhayati who lost her youngest daughter in the disaster.

"I came here every year because I miss her so much, she was only 17, just started college," the 65-year-old told AFP, sobbing.

"It's been 15 years but even until now every time I see an ocean, even on TV, I shudder and feel like a big wave would be coming soon," she said.

Almost 170,000 were killed in Aceh province alone when a 9.1 magnitude undersea quake struck the predominantly Muslim province on December 26, 2004, triggering massive tsunami waves that also killed another 50,000 people in countries around the Indian Ocean, even as far as Somalia.

Some half a million people were left homeless by the catastrophe that destroyed much of the province.

Muhammad Ikramullah was only 13 when the tsunami hit, killing his parents and younger sibling. He spent years moving around, living with relatives and his parents' friends until he was able to provide for himself.

"I am still traumatised, I don't think I will ever forget what happened," the 28-year-old said.

The remains of his family have never been found, but like most people who visit the mass grave every year, Ikramullah only wanted to pray for his loved ones even though their bodies might not be buried there.

Years after the disaster, bodies are still being discovered. In 2018, the remains of dozens of people were found in a newly built housing complex.

Some have never found where their family members were buried.

"I don't know where my mother was buried," Jony China told AFP.

"But I keep coming here because I have a feeling she was close," he said.

Indonesia experiences frequent seismic and volcanic activity due to it position on the Pacific "Ring of Fire" where tectonic plates collide.