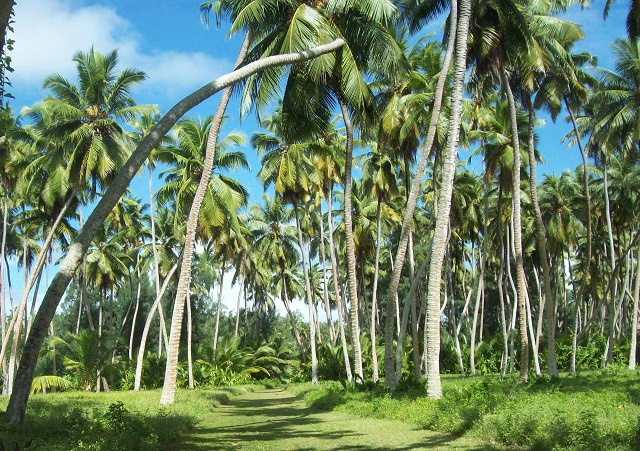 Seychelles was covered with coconut palms long before man decided to settle in these islands. (Islands Development Company)

(Seychelles News Agency) - If you were to be stranded on an island edged with coconut palms, consider yourself a lucky castaway: the "tree of life" will be close by.

The coconut palm can save you from hunger and thirst, give you shelter, and provide fuel for a fire, timber, lines to fish, a hat, and a raft.

As it's done for millennia, the coconut palm today continues to feed, protect and heal around the world.

Coconut (Cocos nucifera) comes from the Portuguese coco, meaning 'the head'. Surprisingly in our Creole language, we say, "Servi ou koko" meaning use your brain or your head.

Let us use our 'koko' (head) to look at the coconut in Seychelles, an archipelago in the western Indian Ocean, as a crop not to be underestimated. The coconut has proven that it is designed to survive and adapt through many socio-economic climates.

Antoine Moustache, the principal secretary of agriculture, explains the evolution of the palm on the island nation.

"Coconut palms were considered invasive mainly on the islands where the nuts would stack around the trunk and germinate and as a result suffocate other plants and biodiversity," said Moustache.

The tree is no longer considered invasive and is less present on the main islands -- Mahe, Praslin and La Digue -- due to the construction of houses, tourism establishments and other infrastructures.

There are still some abandoned plantations in the south of Mahe, like Barbarons and Intendance, where people pick coconut freely to sell to individuals, at the local market or in cottage industries and hotels.

Picking the nuts was a source of income in the early days but the Ministry of Agriculture is no longer involved in coconut cultivation. Today, the Islands Development Company (IDC) is harvesting coconut on some of the other islands like Coetivy, Desroches and Poivre to supply local demand.

Recently, local entrepreneurs are using coconut in the newly created products while others are keeping some of the traditional coconut products alive.

Francis Cupidon is a coconut oil producer from Praslin, the second-most populated island. For more than two decades, Cupidon, who has led his Island Coco Enterprise to success, said that there is a great demand for coconut oil in the world.

"There is a scarcity of coconut on Praslin. I must say that it is due to the young people of Praslin that my coconut oil business stays afloat. They sell and remove the husk for around five rupees ($0.3) to get some fast cash. There are only a few palms around that have grown naturally and the pulp is of high quality," he said.

Cupidon produces virgin coconut oil which is available in many shops on Mahe and at his factory in Grand Anse Praslin. He sells a small bottle for 100 rupees ($7.30).

"The tourists love the product and they buy with enthusiasm and an unpretentious sense of support. They are sensitive to the ecological and organic aspect of my product as well as the spontaneous and real human involvement and care taking place in the process," he added.

The coconut oil producer not only sells his product but also give tips on its healthy uses.

"I usually talk to them about what I know about the coconut palm and its products that prevent obesity, thyroid problems, sores... and they love this genuine interaction," he said.

He added that to be successful in the business "you have to be consistent and innovative if you want to make a living in the coconut industry today because coconut is unavailable to those who need it the most to process for a living. We have an abundance of coconut in Seychelles, yes, but they are all on the outer islands and we don't get them."

Seychelles was covered with coconut palms long before man decided to settle in these islands. It was the only edible plant around according to the records of Captain Corneille Nicholas Morphey, who took possession of Seychelles in the name of the King of France in 1756.

There were no plant products you could feed on before that time apart from the coconut.

In the early 1960s, Seychelles was producing some 45,000 tonnes of coconut turned into copra and oil to export to Europe as well as some Asian countries including India.

Picking a coconut on private property in the last century could get you into serious trouble with the law as coconut production was the pillar of the Seychelles' economy. Today people can almost freely pick coconuts that grow naturally in certain places.

Furthermore, with the fast-growing population, the government started to use the limited land available on the main islands to build houses and other social infrastructures.

The final serious blows to the coconut industry started in the mid-1990s when the last Asian importers of copra like Pakistan stopped trading with Seychelles.

Today the tourism establishments are making use of the coconut, especially in their menus. Coconut is used in curries, desserts and cocktails.

Coconuts can still be found at the Victoria Market and some other shops in other areas for around five rupees ($0.30) or six for 25 rupees ($2.00).