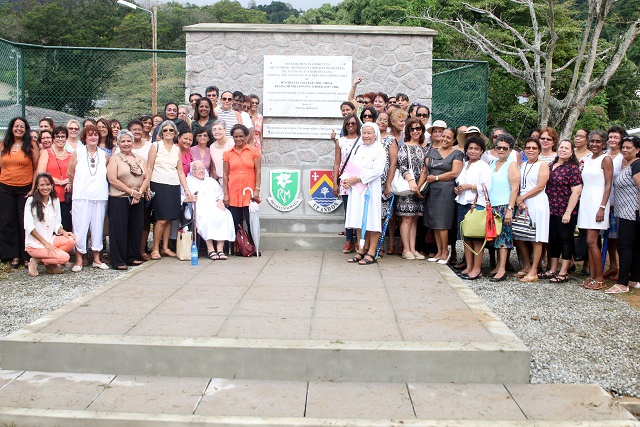 In 2016, to commemorate the 40th anniversary of the islands’ independence these institutions, the Seychelles College and Regina Mundi, were honoured through the unveiling of a monument by past students. ( (Joe Laurence, Seychelles News Agency)

Seychelles College, originally an all-boys’ school, and the Regina Mundi girls’ school opened in 1947 and 1957 and are seen as the foundation of modern education on the island nation.

Both institutions were closed in the early 1980s after a comprehensive review of the education system in Seychelles, an archipelago in the western Indian Ocean, when education became free and compulsory and children had to attend schools in their districts.

SNA is looking back at Seychelles’ history ahead of its 250th anniversary in August next year.

The inauguration of the institution of higher learning in the form of the University of Seychelles at Anse Royale in November 2009 was a milestone in the history of education in the island nation, which began almost two centuries ago.

Through local historian Tony Mathiot, SNA retraced the history of education and schools.

In 1830, a Scotsman named James Moses Collie arrived in Seychelles and established a small school for the children of the English-speaking inhabitants. As for the daughters of the French settlers, they received private tuition by the French-speaking islanders.

When Charles Augustus Mylius arrived in February of 1839 to take up his appointment as the new civil commissioner of Seychelles, he was somewhat appalled by the existing circumstances of the population, especially the conditions of the African slaves whose lives had changed with the Emancipation Act of 1836.

Soon after, two English catechists, George Clarke and his wife Jane, arrived to open a school for the children of ex-slaves under the auspices of the Lady Mico Charity. Lady Jane Mico inherited most of her husband’s fortune in 1666 when he died. Samuel Mico was a trader with the East India Company and dealt with the importation of spices and silk.

Lady Mico who was a great philanthropist used her wealth to establish donation houses for the poor widows of London and training institutions in many British Colonies.

The Charity Trust School was the first free school ever to be established in Seychelles and it was the beginning of an Anglican mission school in the archipelago.

“On September 30, 1853, after Seychelles was established as an apostolic prefecture of the Roman Catholic Church a Catholic primary school for boys opened in Victoria and enrolled 42 children,” said Mathiot.

Early in 1861, Father Jeremie, who was the apostolic prefect, brought the sisters of St Joseph de Cluny to Seychelles to open a convent school for girls and an orphanage and in 1867 a first secondary school for boys was opened. It was called the School of Notre Dame de Sacre Coeur.

In order to manage the school and to put into place a paper curriculum, Father Ignace – who had replaced Father Jeremie - decided the best option was to seek the help of a Religious Teaching Order.

In fact, this was the only recourse he had, since at that time there was nobody in Seychelles who was academically qualified to teach.

According to Mathiot, “in 1867, five brothers of the Frères des Ecoles Chrétiennes arrived and assumed control of the schools and for many years the education institutions were led by churches.”

And from then on both the Anglican and Catholic, forged ahead with the building of the parishes and schools all over the three main islands.

It was in 1947 that a more modernized education system through Seychelles College was founded.

In 1950, the institution moved into its new buildings at Mont Fleuri. It was under the management of the Brothers of Christian Instruction of Ploermel, a French Canadian branch of a French teaching order.  Its first director was Father Ambrosius Meek, who in July 1951 was found hanged in his office.

Both institutions were opened as part of the educational reform plan of Walter Giles, the director of education at that time. Giles wanted major educational reform, new schools built and the present one improved. And above all, he wanted a new system of education, humane and universal, for any colour or creed.

The 1950s were a period where extensions of various schools were carried with unrelenting progress. The physical conditions of schools were seen as a requisite conducive to the success of learning.

In 1959, a teacher training college was opened were experienced but uncertified teachers could attend a one-year course. In 1960, there were a total number of 244 teachers in the 33 schools of Seychelles attended by 6,094 pupils, 68 trained and 186 untrained.

Both schools, the Seychelles College and the Regina Mundi required an admittance fee, but the bursary programme for the less fortunate children with academic abilities gave others the opportunity to join through the national entrance examinations.

A past student, Derrick Ally said, “I joined through the entrance exams and it was very daunting for me to join all those bright kids who had been schooled here since Seychelles College primary,” Ally adds that: “It was a great institution.”

In 2016, to commemorate the 40th anniversary of the islands’ independence these institutions were honoured through the unveiling of a monument by past students.

Bernadette Larue said that the monument represented the sentiments that former students have deep in their hearts of memorable years spent at these two institutions.

“This was a big part of my life where I spent years of being educated, disciplined, grew in maturity and wisdom to become who and what I am today,” said Larue

Another past student who was also a former Seychelles’ Minister for Agriculture and Land Use, Dolor Ernesta said, “it is significant to pay tribute and ensure that this legacy takes its rightful place in the form of a monument.”

The two buildings were Regina Mundi and the Seychelles College were, which now houses the Seychelles Ministry of Education and Mont Fleuri Secondary school.

Even though these institutions were seen as modern and revolutionized education on the islands one thing remained they were still run by religious orders.

Brother David Denicourt and Sister Dominic Kavanagh who passed away recently where the two last headteachers of the schools.

Kavanagh, who was in Seychelles since 1947, saw the inauguration of the Regina Mundi school and when it closed down she was at the head of the institution.