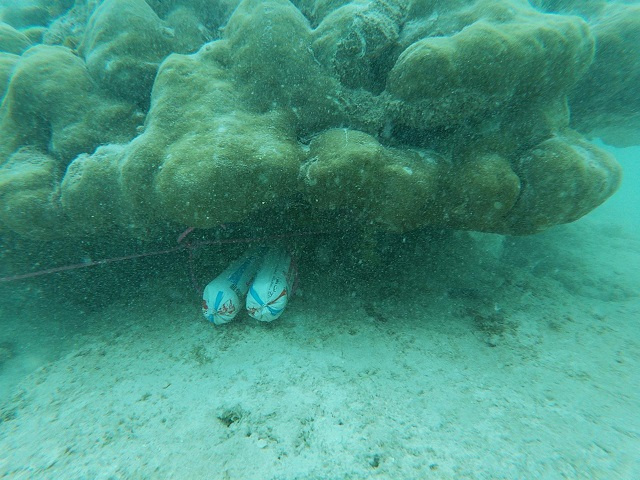 The blasting in the channel at Anse Aux Pins is to remove coral that grows like boulders. (Julian Morel)

(Seychelles News Agency) - Authorities in Seychelles are undertaking blasting works in one of the eastern Mahe channels to remove a type of coral that grows like a boulder, said a top official.

The work which is being carried out by the Seychelles Fisheries Authority and the Seychelles Coast Guard is taking place in one of the channels at Anse Aux Pins, an eastern district on Mahe, the main island.

The manager of infrastructure and development of the authority, Georgie Nicette, told SNA last week that the blasting follows a request made by fishermen using the channel.

“This area is used by a lot of fishermen when going out to fish. For a while now the coral has been causing an obstacle for the fishermen and they have complained and said it is hard for them to get to the shores when the tide is low,” said Nicette.

The coral which is in the porites genus are some of the longest-lived species on earth and can attain massive proportions in the wild. They also form some of the largest coral colonies, with growths reaching about eight metres in height

According to Nicette the fishermen went as far as taking the Minister for Fisheries, Charles Bastienne, to the area to show him the challenges they face.

The blasting exercise is a routine one which is being implemented following consultations and approval from the Seychelles Marine Safety Administration and the Ministry for Environment.

Three officers from the coast guards are undertaking the blasting assisted by two fishermen from the area.

Second Lieutenant Julian Morel told SNA on Friday that the exercise which is being done with the cooperation of boat owners and fishermen, went well as it was well planned.

Before the actual blasting, the divers go down to the area and according to Morel this is to see the different parameters to set the explosives.

“Once the blasting is done, we leave the area for an hour or so. This allows the sand to settle and the sea to clear. We then dive again to ensure that the boulders have been demolished,” added Morel.

One of the fishermen assisting the coast guard, Michel Hoareau, said he has been using the channel for 50 years and these boulders of the coral have always been a problem.

“It is difficult to navigate through and we risk damaging our boats and our engine, which for us is a big risk,” he said.

This was echoed by another fisherman, Aubrey Desnousse, who also uses the channel.

“It is very difficult to get to the usual place where we berth when the tide is low as we always have the risk of our boats bumping against a mass of coral," Desnousse told SNA.

He added that as it is important to replenish coral on our coast, it is also of paramount importance to remove coral presenting an obstacle.

With an Exclusive Economic Zone of 1.4 million square kilometres, Seychelles, a group of 115 islands in the western Indian Ocean, relies largely on the resources coming from its surrounding waters. Fisheries is the second top contributor to the island nation's economy.

Nicette said as corals are important for the livelihood of the population, the authorities "are not blasting to destroy coral that is still alive; we are taking necessary measures to avoid this."