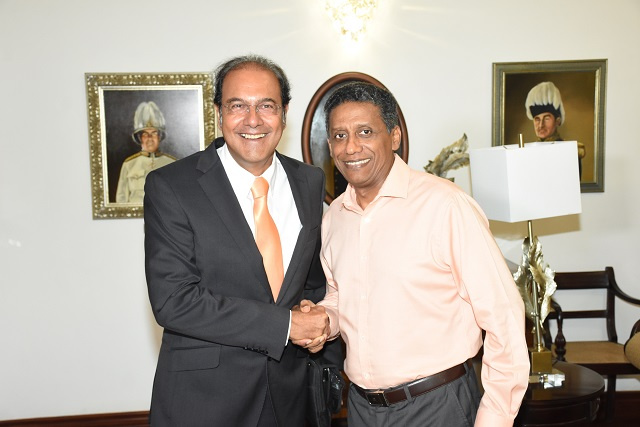 Steven Obeegadoo, who is in Seychelles on a working visit, paid a courtesy call to President Danny Faure at State House on Monday. (Joena Meme)

(Seychelles News Agency) - Mauritius and Seychelles will look at ways both island nations can protect their marine resources and speak in one voice on climate change issues, a Mauritian minister said on Monday.

The Minister of Housing, Land Use Planning of Mauritius, Steven Obeegadoo, who is in Seychelles on a working visit, paid a courtesy call to President Danny Faure at State House in Victoria, the capital.

Obeegadoo and Faure talked about different subjects especially with regards to the sea and its resources, given that both countries are situated in the Indian Ocean.

"As islanders, we look to the sea for sustenance. It is important that we find common grounds to protect our marine resources for the future generation. We should at all cost prevent over-exploitation of our marine resources," the Mauritian minister told reporters.

Another subject touched upon during the meeting was the issue of climate change, and Obeegadoo said being surrounded by vast waters, both countries are vulnerable to climate change.

"Often our voice is not heard properly, but if we come together as one, we can help to convince the world about the danger of climate change," he said.

The Mauritian minister and Faure also talked about land and housing and how both countries have similar problems.

"With limited access to land, it is always a challenge to allocate land and houses to the public. In Mauritius, we have a system which looks at the most vulnerable to allocate social housing. I have learned that Seychelles has a point system, which is working very well and this is a model we can perhaps adopt in Mauritius," said Obeegadoo.

The visit was also an opportunity for Obeegadoo to convey his best wishes to Faure on behalf of the Mauritian Prime Minister Pravin Jugnauth and convey the hope to strengthen the good relationship that exists between both countries.

Obeegadoo told reporters that President Faure and himself met when they were both Minister of Education in their respective countries.

"Since then we have built a good friendship and we have worked alongside each other on several international platforms namely the Commonwealth and those related to education. Thus, it is with immense pleasure for us to meet again to catch up on all that we have achieved over the years," he said.

Obeegadoo said he will also take time on this visit to explore the islands of Seychelles, an archipelago in the western Indian Ocean.