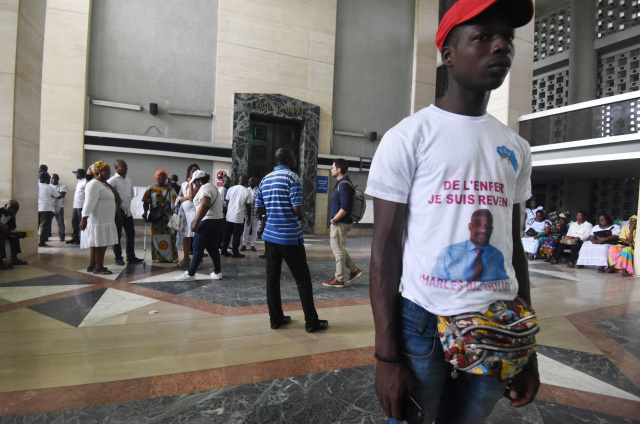 A man wears a t-shirt reading 'From hell I have come back' and a picture of Charles Ble Goude at the courthouse (Palais de Justice) of Abidjan on November 6, 2019, during a procedure of 'crimes against civilians' and 'crimes against prisoners of war' against Charles Ble Goude, who was acquitted in first instance by the International Criminal Court (ICC) for crimes against humanity. Former Ivory Coast president Laurent Gbagbo, the first head of state to stand trial in The Hague, and his deputy Charles Ble Goude were both cleared of crimes against humanity in January 2019 and released under conditions the following month. The ICC's chief prosecutor has appealed the ruling alleging "legal and procedural errors". Belgium agreed to host Gbagbo, 73, after he was released in February under conditions including that he would return to court for any prosecution appeal against his acquittal. Ble Goude is living in the Netherlands under similar conditions. Gbagbo and Ble Goude were tried over responsibility for murder, attempted murder, rape, persecution and "other inhumane acts" during five months of violence, both pleading not guilty. However, judges dismissed the charges, saying that the prosecution "failed to satisfy the burden of proof to the requisite standard." (SIA KAMBOU / AFP)

(AFP) - Former Ivory Coast political leader Charles Ble Goude said Monday he had been sentenced in absentia to 20 years in prison by an Ivorian court over murder, rape and torture charges.

Ble Goude was cleared of crimes against humanity at the International Criminal Court in the Hague this year, along with his former boss, Ivory Coast ex-president Laurent Gbagbo.

But following his acquittal, an Ivorian court brought a fresh trial against him over the 2010-2011 bloodshed which followed a disputed vote in the West African nation.

The former aide to Gbagbo, who has remained in the Netherlands following his ICC trial pending a possible appeal by the prosecution, told AFP the Ivorian court had convicted him on Monday.

He said he was "surprised by the verdict", adding that he had been sentenced to 20 years in prison, 10 years deprivation of his civil rights, and a fine of 200 million CFA francs ($340,000) to be paid to the victims.

The court has issued an arrest warrant for him, he added.

About 3,000 people died in the turmoil that swept Abidjan -- once one of Africa's most cosmopolitan cities -- in the aftermath of the November 2010 presidential polls when Gbagbo refused to accept defeat to bitter rival Alassane Ouattara, who remains in power.

Leonard Lebry, the prosecutor general at the Court of Appeal in Abidjan has previously said the case against Ble Goude -- once dubbed the "general of the streets" for his ability to mobilise Gbagbo supporters during the conflict -- was "wider" than the ICC prosecution and covered different events.

Gbagbo, the first former head of state to stand trial at the ICC, and Ble Goude were tried over responsibility for murder, attempted murder, rape, persecution and "other inhumane acts" during five months of violence, both pleading not guilty.

They were released by the ICC to live in Belgium in February under conditions including that he would return to court for any prosecution appeal against his acquittal.

Ble Goude is living in the Netherlands under similar conditions.

Last month the Ivorian court rejected an appeal over the January 2018 sentencing of Gbagbo and three aides for the "robbery" of the Central Bank of West African States (Bceao) during the post-election crisis.

The opposition has claimed Ouattara is attempting to prevent Gbagbo returning to the country ahead of 2020 elections expected to be a crucial test for Ivory Coast, which has long been west Africa's top economic performer and is the world's leading cocoa producer.

The court conviction comes in the same month that an arrest warrant was issued for former rebel leader and would-be Ivory Coast presidential candidate Guillaume Soro, who aborted his planned return to the country at the last minute.

Africa » Be a reporter: Write and send your article » Subscribe for news alert
Tags: ICoast, politics