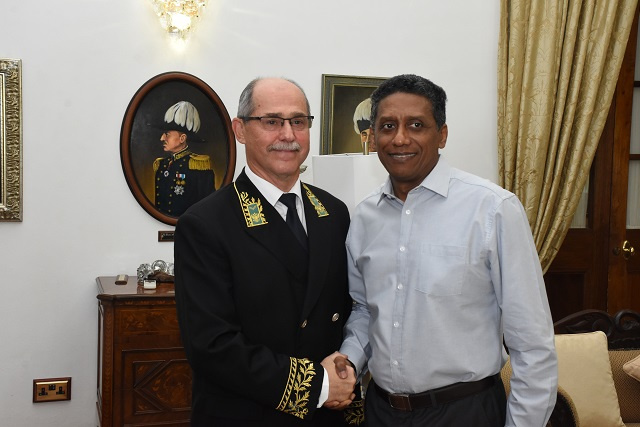 (Seychelles News Agency) - The signing of a visa waiver agreement between Seychelles and Russia is one of the biggest achievements of the outgoing Russian ambassador.

Vladimir Delous made the statement to reporters after paying a farewell visit to President Danny Faure at State House on Tuesday.

"Since December 2015, Seychellois nationals travel to Russia without a visa after the signing of a visa waiver agreement in September the same year. The visa waiver agreement between the two countries has come at an opportune time. It has helped to fuel the economy and the tourism industry. It has also helped to develop the people to people contact between the two nations," said Delous.

Tourism is one of the important areas of cooperation between the two countries. According to the March figures of the National Bureau of Statistics, around 3,700 visitors from Russia visited Seychelles in 2019.

The historical first Russia-Africa summit in October was also discussed.

The President of Seychelles, an archipelago in the western Indian Ocean, participated in the opening plenary of the summit and a panel discussion on "Investing in Africa".

Seychelles and Russia have enjoyed diplomatic relations since the western Indian Ocean archipelago gained its independence in 1976.

Delous said that "Russia became the first country to recognise Seychelles' independence. Since that time our relations have improved."

Bilateral cooperation between the two sides exists in the military field as well as in education. A number of Seychellois have studied and are still being sent to pursue further education opportunities in Russia.

The Russian ambassador said that he has helped to establish a good basis to move forward and build a stronger relationship and he hopes that his successor will carry on the good work.