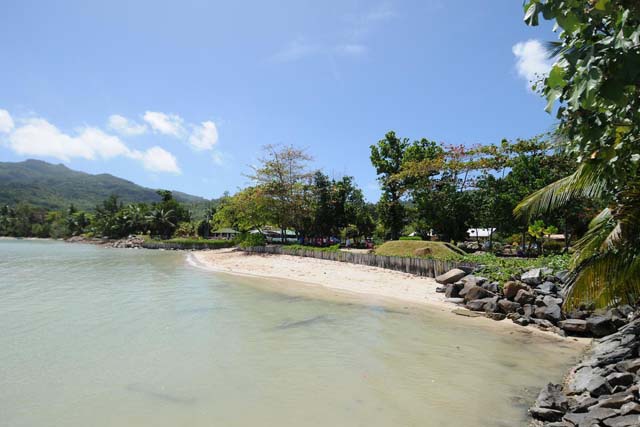 (Seychelles News Agency) - Seychelles being a small island nation surrounded by the Indian Ocean remains vulnerable to the effects of climate change. One clearly visible sign of such vulnerability lies on the archipelago’s coastlines where several shorelines have been subjected to intense degradation and erosion.

North East Point in the northern part of the main island of Mahé, Anse La Mouche (Bay of the Fly) in the western part of Mahé and even the shoreline near the jetty on third most populated island of La Digue are examples of regions that have bared witness to coastal erosion mainly due to rising sea level as well as stronger waves which removes large portion of sand from the beaches.

Building rock or timber armouring, planting beach vegetation are some of the measures adopted to rehabilitate eroded beaches.

Part of Anse La Mouche, in the Western part of Mahé which for several years have been subjected to intense and aggressive erosion, is a recent example of steps taken to rehabilitate an eroded coastline.

Considered one of the finest stretches of coastline of the archipelago the severe erosion was by September 2011 characterized by high exposure of tree roots- in some cases complete uprooting. There was also intense scouring up to and beneath the main road, parallel to the beach.

The site was at the time visited by the Seychelles President James Michel, who had spent his childhood at Anse La Mouche and recalled that some huge Takamaka trees under which he used to play had presumably long disappeared.

Together with then Environment Minister Joel Morgan they initiated a project which almost three years later has brought about a complete change of scenery as the area has not only been rehabilitated but it has also been turned into a recreational park.

The first phase of the three-year project focused primarily on the reinstatement of the area by the use of mixed soft and hard engineering techniques.

This included reclaiming approximately 18 metres of lost beach for a distance of 178 metres, using coral fill to recreate the dune while armouring the land with a matrix of timber piling structure for the entire length. This is to allow for the deposition of sand as waves surge through and are trapped behind the piling cloth.

The project, according to Nimhan Senaratne, Director of the Coastal Adaptation and Management Section in the Ministry of Environment and Energy, required 2,600 Casuarina logs measuring 3 metres long each. These were felled on reclaimed Romainville Island, near Port Victoria where currently stand 5 tall wind turbines that form part of the island nation’s first windfarm project.

The scheme also required some 2,000 tons of coral fill and 1,500 tons of rocks to backfill the area.

Senaratne also showed SNA rock cladding at both ends of the rehabilitated beach, which he said was laid some weeks ago to "further secure the more vulnerable parts of the protection scheme."

The second phase of the project started early 2013 purely for the purpose of rehabilitating the area. It focussed on ground preparation works for eventual replanting of vegetation.

Various species of coastal plants have been planted over the past year. These include the evergreen shrub ‘Vouloutye’ and the beach creeper ‘Patatran’. The coastal vegetation have been blended with ornamental plants and other features like benches made from recycled timber that has helped to create the Anse La Mouche Coastal Recreational Park which the archipelago’s Environment and Energy Minister Rolph Payet inaugurated  on Thursday.

Payet said the project was unlike any other coastal protection scheme implemented in the country.

"It is a great example of coastal adaptation measure adapted in a small island. Through its implementation, the project has been visited by many international visitors and experts, each time appreciating its nature and noting that it constitutes a model and example that the world can use or replicate," said Payet.

The government funded project together with the help of the Environment Trust Fund have cost a little over $200 thousand.