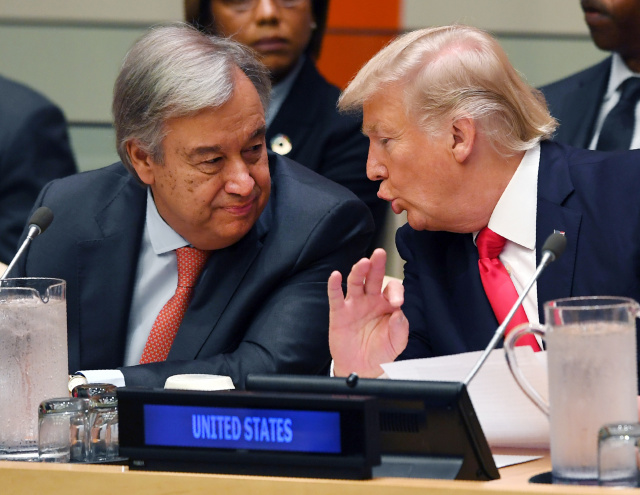 (FILES) In this file photo taken on September 18, 2017, US President Donald Trump and UN Secretary-General Antonio Guterres speak during a meeting on United Nations Reform at the United Nations headquarters in New York. Guterres said on January 3, 2020, the "world cannot afford" another Gulf war, following the killing of Iran's top military commander by a US strike. "The secretary-general has consistently advocated for de-escalation in the Gulf," a spokesman for Guterres said in a statement. "This is a moment in which leaders must exercise maximum restraint. The world cannot afford another war in the Gulf." (TIMOTHY A. CLARY / AFP)

(AFP) - China on Friday appealed for restraint from all sides, "especially the United States", after top Iranian commander Qasem Soleimani was killed in a US strike in Iraq.

The Pentagon said President Donald Trump ordered Soleimani's "killing," after a pro-Iran mob this week laid siege to the US embassy in Baghdad.

"China has always opposed the use of force in international relations," Chinese foreign ministry spokesman Geng Shuang said at a daily press briefing.

He said Iraq's sovereignty, independence and territorial integrity must be respected.

China, a permanent member of the UN Security Council, is a key partner of Iran and major buyer of the country's oil.

Geng said China urged all sides to abide by the principles of the UN charter and the "basic norms of international relations".

Iran, China and Russia held joint naval drills in the Indian Ocean and the Gulf of Oman last week and the Iranian foreign minister visited Beijing earlier this week.

China and Russia are also parties to the 2015 nuclear deal with Iran, from which Trump withdrew in May last year.

General » Be a reporter: Write and send your article » Subscribe for news alert
Tags: Iraq, Iran, US, China