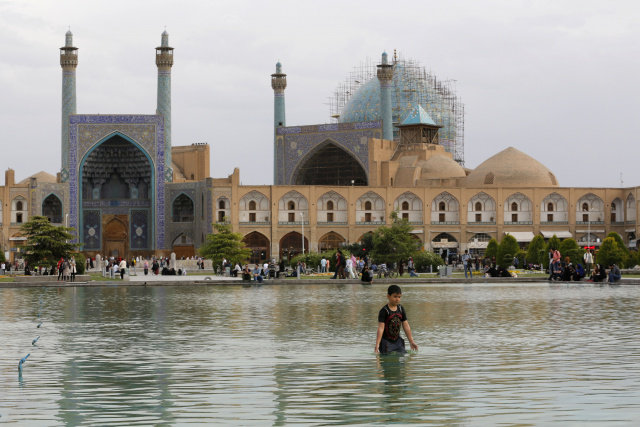 (FILES) In this file photo taken on April 12, 2018 people visit the historical Naqsh-e Jahan Square in Isfahan. Secretary of State Mike Pompeo insisted Sunday that any US military action against Iran would conform to international law after President Donald Trump was accused of threatening a war crime by declaring cultural sites as potential targets.Tehran's foreign minister drew parallels with the Islamic State group's destruction of the Middle East's cultural heritage following Trump's tweets that sites which were "important to... Iranian culture" were on a list of 52 potential US targets.And as Twitter was flooded with photos of revered Iranian landmarks in ancient cities such as Isfahan under the hashtag #IranianCulturalSites, leading US Democrats said the president would be in breach of international protocols if he made good on his threat. (ATTA KENARE / AFP)

(AFP) - US President Donald Trump on Sunday vowed "major retaliation" if Iran tries to avenge the killing of its key military commander Qasem Soleimani and doubled down on a threat to bomb Iranian cultural sites.

"If they do anything there will be major retaliation," Trump told reporters.

Trump, speaking on Air Force One on his way back to Washington from a vacation in Florida, also said he would impose "very big sanctions" on Iraq if it follows through on a parliament vote calling for the expulsion of US troops based in the country.

The president's rhetoric added to already spiraling tensions in the Middle East following the killing by the United States of Soleimani -- one of the most important figures in the Iranian government -- in a drone strike near Baghdad's international airport.

Trump had already threatened widespread bombing of Iran if Tehran carries out its own threats to attack US troops and interests in the region.

In his latest comments, he dismissed strong criticism of his earlier warnings that targets could include unspecified cultural sites in Iran -- a country with an ancient heritage.

Trump's reaction to the Iraqi parliament vote urging the departure of US troops also illustrated the widening fallout from the decision to kill Soleimani last week.

He said that Iraq, a US ally, would be treated like foe Iran, whose economy has been devastated by US-led sanctions, if the troops were made to exit on unfavorable terms.

"If they do ask us to leave -- if we don’t do it in a very friendly basis -- we will charge them sanctions like they’ve never seen before," Trump said.

Trump said the US base in Iraq was "very extraordinarily expensive."

"We're not leaving unless they pay us back for it," he said.

General » Be a reporter: Write and send your article » Subscribe for news alert
Tags: US, Iran, Iraq, diplomacy, unrest