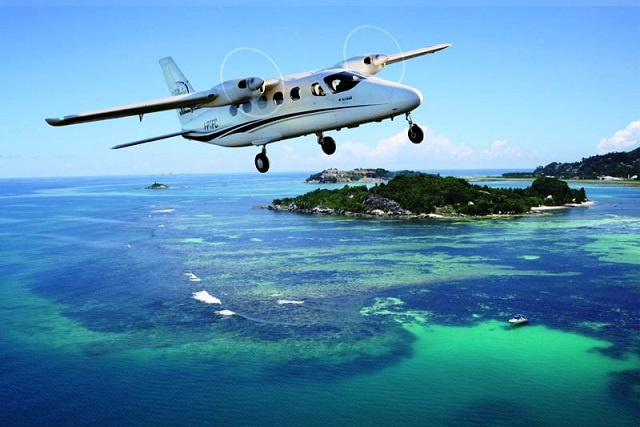 (Seychelles News Agency) - A provider of aerial limo services in Seychelles -- Zil Air -- has added a new plane to its fleet and will survey the domestic air travel potential in the next three years before it invests in another plane.

The new plane, named Adam, is a Tecnam 2012 Traveller aircraft which landed in Seychelles on November 29, will join Zil Air's other aircraft, the P68 Vulcan Air registered as Eve. The new plane brings the total number of Zil Air's aircraft to nine -- seven helicopters and two planes.

Tecnam P2012 Traveller is an 11-seat utility aircraft designed and manufactured by the Italian company Costruzioni Aeronautiche Tecnam, based in Capua, Italy

The company's executive director, Francis Savy, says there was the demand for such an aircraft as more outer islands rely on such a service for their guests.

"We've had a small aircraft for the past seven years and we have been able to test the potential of the market to see what types of services the hotels expect from us. We have seen that more and more guests want to travel by plane. So that is why we have invested in this bigger and more spacious aircraft," said Savy.

Zil Air started commercial operations in April 2009. It offers flights seven days a week supported by a young and dedicated team of 85 personnel. The company offers an experience that promises to be 'more than just a flight'.

The company said that the new twin-engine aircraft is equipped with autopilot and is capable of instrument flying and night operations.

The new plane is capable of landing on both hard runways and grass strips.

Savy said this will open up a new market. Initially, the previous plane had seven landing locations while the seven helicopters have 30 landing pads on seven islands.

The company will test the capacity of the aircraft in the next three years to see whether it should invest in similar planes.

"We are presently offering chartered flights. However, our long term plan is to have scheduled flights but we can do this with a maximum of three planes. We will be studying the market in the coming years to see if there is a potential to invest in another aircraft," says Savy.

The new aircraft costs 2.3 million euros and for the flight to Seychelles, an archipelago in the western Indian Ocean, it was commanded by captains Gerhard Geyer, John Rachel and Anthony Hoareau, from the Tecnam factory in Italy on a 4,500 nautical mile journey.