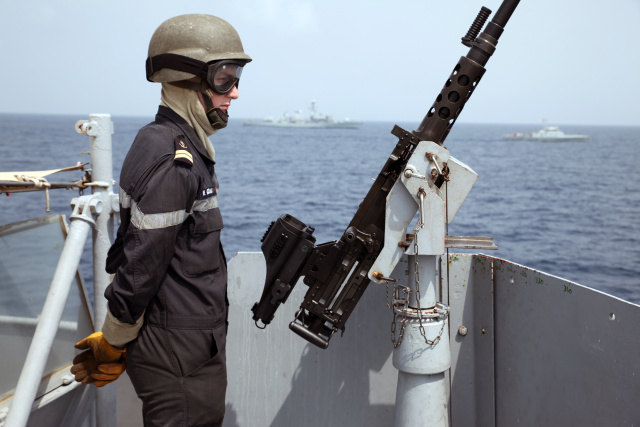 A sailor aboard the French Navy ship "Commandant Birot" stands next to a 12.7 mm gun as the ship leaves the port of Tema ahead of a training exercise in the Gulf of Guinea, off Tema harbour on February 20, 2014 . Grey, sleek, with cannon and an assortment of machine guns, the French navy's Commandant Birot is well-equipped to patrol Africa's most dangerous stretches of ocean. Suspected pirates killed four Nigerian navy operatives and abducted three foreign sailors in an attack on a dredging ship last week, security sources said Monday.(AFP PHOTO / CHRIS STEIN)

(AFP) - A Nigerian navy speedboat loaded with special forces troops skims across the waves towards a suspect vessel in the Gulf of Guinea.

Guns ready, black-clad officers clamber up a rope ladder and fan out across the decks, looking for pirates believed to have taken the crew hostage.

This time the threat is not genuine: the boat is a French naval supply ship and the raid staged as part of an international exercise off West Africa's coast.

But the menace Nigeria -- and countries along the Atlantic shore -- are seeking to tackle is deadly real.

The waters of the Gulf of Guinea, which stretches some 6,000 kilometres from Angola in the south to Senegal in the north, are among the most dangerous in the world for piracy.

While attacks by pirates have declined globally including in other hotspots like the Gulf of Aden off Somalia, the numbers remain steady off West Africa.

In the first nine months of this year the Gulf of Guinea accounted for 82 percent of crew kidnappings around the world, according to the International Maritime Bureau, an organisation monitoring crimes at sea.

In a stark illustration of the problem, 13 sailors were kidnapped in two separate attacks on Norwegian and Greek vessels in the waters of Benin and Togo, west of Nigeria, even as the international exercise was still going on.

Despite the headline-grabbing incident, regional navies like Nigeria's point to a decline in attacks since 2018 and say increased international cooperation, better resources and more assertive patrols are helping.

"It is a challenge but it is not insurmountable," Commodore Sunday Oguntade told AFP, as he monitored the exercise from the frigate NNS Okpabana.

"When the maritime environment is free for illegal activities to thrive it impacts on the economic interests and national interests."

Much of the problem originates in the Niger Delta where the region's vast oil wealth has failed to trickle down to local populations and widespread poverty has stirred unrest.

Pirates emerge from the creeks and swamps in high-powered speedboats to raid passing ships, kidnap crews and spirit them back to Nigeria's shores.

"Nigerian piracy currently ranks in the top two security concerns, with the geopolitical crisis in the Straits of Hormuz" between Iran and the Arabian Peninsula, said Jakob Larsen, head of maritime security at BIMCO, the world's largest shipping association.

Tactics have shifted over the past decade as a fall in the oil price and tighter regulation has seen criminal gangs switch from stealing cargoes of crude to abducting sailors for ransom.

Regional navies -- including Nigeria's -- have long struggled with underfunding and a lack of resources to police the waters off their shores.

Larsen said Nigerian naval activity is mainly conducted on a payment basis as "public-private partnerships where commercial companies offer the services of navy ships" as protection to visiting ships.

"There is a risk that this reduces the incentive to reduce the piracy threat, as a reduction...would be bad for business," he said.

But steps are being taken to improve.

"The Nigerian government now appears to be strengthening their efforts, investing in new capabilities and amending their legislation to make piracy a punishable offence," he said.

"Things seem to be going in the right direction."

Dirk Steffen, an expert on maritime crime at consultants Risk Intelligence, said the Nigerian navy has made "some notable improvements in its operational readiness and capabilities — from being almost passive to providing constructive support in the fight against piracy".

The starting base was very low and regional forces still remain "small with very limited ability to patrol" their territorial waters and suffer from inadequate funding, training, maintenance and logistical infrastructure, he said.

But numerous exercises with Western navies have brought some progress along with better cross-border cooperation after leaders from the region agreed to bolster the fight against piracy in 2013.

One key element could be stepping up the number of pirates brought to justice on land.

Nigeria in June passed its first law specifically making piracy a crime and the justice ministry with support from the United Nations has set up a special prosecution department focused on the issue.

"The aim is to increase prosecutions to combat piracy," principal state counsel Tegah Fofah-King, a member of the new unit, told AFP as she observed the exercise at sea.

Attempts to curb piracy in the Gulf of Guinea have drawn comparisons with the situation on the other side of the continent in the lawless waters off Somalia.

A surge in attacks on vessels along the strategic shipping route saw international navies intervene a decade ago and now attacks have almost stopped.

But there are no moves towards a broader intervention in the Gulf of Guinea.

Analyst Steffen said the region needed an "African solution to an African problem" where foreign partners help with intelligence, logistics and training.

Beyond clamping down on the pirates at sea, observers agree that the long-term solution lies on shore in Nigeria by tackling the corruption, lawlessness and poverty that fuel crime and piracy.

"Pirates must be deterred, yes, but they also need to have a viable alternative livelihood when life as a pirate has become less attractive."