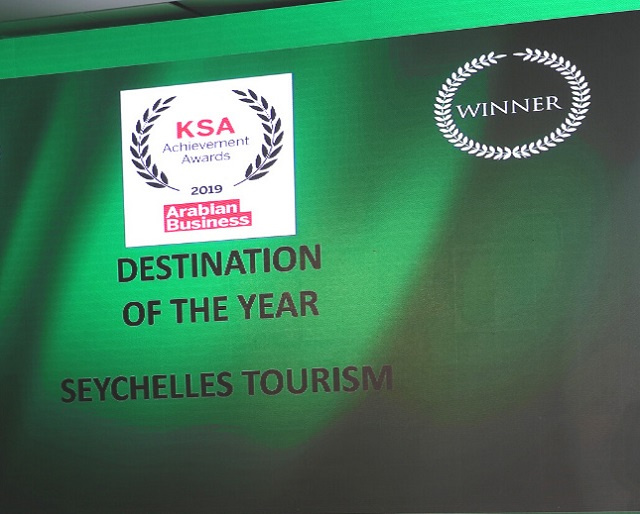 The award was announced during the KSA Arabian Business Awards at the Ritz Carlton hotel in Riyadh, Saudi Arabia. (Seychelles Tourism Board)

As 2019 came to an end the Seychelles islands were once again bestowed with another welcome award: ‘Destination of the Year’.

The award was announced during the KSA Arabian Business Awards at the Ritz Carlton hotel in Riyadh, Saudi Arabia.

The event was organised by the Arabian Business -- one of the most prominent business magazines in the region.

It honoured a number of top companies, institutions and business persons for their successes and excellence in their respective industries as well as recognising their contributions to the business sectors.

Ahmed Fathallah, Seychelles Tourism Board (STB) representative in Dubai - who was at the event - said that Seychelles as a destination is gaining increasing popularity.

“These achievements continuously inspire the STB team at headquarters and in the offices abroad including myself to keep on intensifying our efforts in promoting the destination,” stated Fathallah.

According to him, there should be more such events “as a way of acknowledging and thanking our valued partners across the media, trade, consumer and corporate sectors. Our success is a tribute to the combined efforts not only of our team but our valued trade partners as well.”

For 2019 United Arab Emirates was the fifth-leading market to Seychelles with 24,112 visitors coming to the island nation. In 2018, 25,024 Arabs visited, making them the fourth major market after Germany, France, and the United Kingdom for that year.

The award comes at a time when Seychelles – renowned for its pristine environment and diverse unique biodiversity - is easily accessible for this market.

The United Arab Emirates is also popular with the Seychellois with around 7,000 nationals vacationing there in 2018, making it a top destination for locals.

This month, Emirates celebrated a key milestone: 15 years of serving Seychelles.  Back in 2005, the airline operated four weekly flights; currently Emirates flies to the island nation twice a day, every day.

Over the past 15 years, the airline has carried some 2.6 million customers on 14,328 flights covering 47.4 million kilometres on the Dubai-Mahe route.

In 2019 alone, Emirates carried 278,000 customers on the route, helping boost tourism, trade and the local economy.

Sherin Francis, chief executive of the Seychelles Tourism Board, said, “Emirates has been an active airline partner in the development of Seychelles' tourism industry over the years. We hope to continue to count on its support and partnership for many more years to come.”