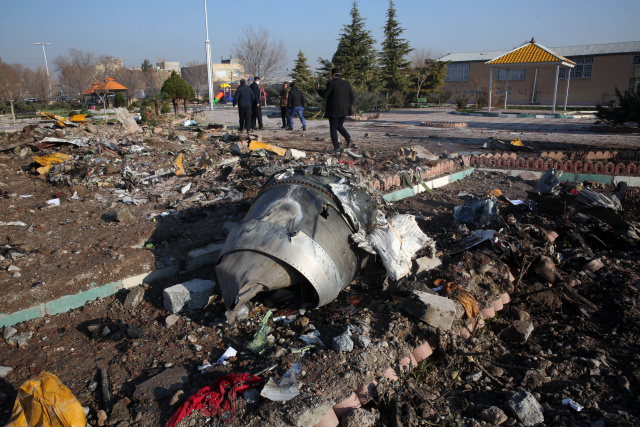 Rescue teams work amidst debris after a Ukrainian plane carrying 176 passengers crashed near Imam Khomeini airport in the Iranian capital Tehran early in the morning on January 8, 2020, killing everyone on board. The Boeing 737 had left Tehran's international airport bound for Kiev, semi-official news agency ISNA said, adding that 10 ambulances were sent to the crash site. (AFP)

(AFP) - A Ukrainian airliner crashed shortly after take-off from Tehran on Wednesday killing all 176 people on board, mainly Iranians and Canadians.

Search-and-rescue teams were combing through the smoking wreckage of the Boeing 737 flight from Tehran to Kiev but officials said there was no hope of finding anyone alive.

The vast majority of the passengers on the Ukraine International Airlines flight were non-Ukrainians, including 82 Iranians and 63 Canadians, officials said.

The crash occurred with tensions high in the Middle East and shortly after Tehran launched missiles at bases in Iraq housing US troops.

However, there was no immediate indication of foul play and Ukrainian President Volodymyr Zelensky warned against "speculating" on the cause of the disaster.

The US aviation authority said it had banned US-registered carriers from flying over Iraq, Iran and the Gulf, and airlines including Lufthansa and Air France suspended flights through Iraqi and Iranian airspace.

Footage released by Iranian state media showed a field on fire and the smouldering wreck of the plane.

Body bags were lined up on the ground and the passengers' personal items -- including luggage, clothes, a Santa Claus doll and a boxing glove -- were scattered in the debris.

It slammed into farmland at Khalaj Abad, in Shahriar county, about 45 kilometres (30 miles) northwest of the airport, Iranian state media said.

- Children, students on board -

As well as the Iranians and Canadians, the passengers included 10 Swedes, four Afghans, three Germans and three Britons, Ukraine's foreign minister said. Eleven Ukrainians -- including the nine crew -- were among the victims.

Canada is home to a large Iranian diaspora community and UIA offers discount flights between Tehran and Toronto, with a transit in Kiev.

Canadian Foreign Minister Francois-Philippe Champagne said Ottawa was in touch with Kiev about the crash.

"Our hearts are with the loved ones of the victims, including many Canadians," he said on Twitter.

UIA released a list of the names and birth years of passengers. At least 25 were under the age of 18.

Two passengers registered on the flight did not board before take-off, Oleksiy Danilov, the secretary of Ukraine's national security council, told reporters.

The airline said the Boeing 737 had been built in 2016 and checked only two days before the accident. It was Kiev-based UIA's first fatal crash.

"The plane was in working order," UIA company president Yevgeniy Dykhne told a briefing in Kiev where he choked back tears. "It was one of our best planes with a wonderful crew."

The airline is in part owned by Igor Kolomoisky, a controversial Ukrainian businessman with ties to Zelensky.

The president, who cut short a vacation in Oman to return to Kiev, ordered an investigation into the crash and a sweeping check of "all civilian aircraft" in the country.

"I ask everyone to keep from speculating and putting forth unconfirmed theories about the crash," Zelensky wrote on Facebook.

Iranian state media reported that the plane caught fire after crashing, but a video aired by the state broadcaster appeared to show the plane already on fire as it fell from the night sky.

Iran on Wednesday fired more than a dozen ballistic missiles at Iraqi bases housing the US military, in the first action of its promised revenge for the US killing of a top Iranian general.

"There is a lot of speculation at the moment it has been shot down -- I think that is not going to be the case at all," said Stephen Wright, a professor of aircraft systems at Tampere University in Finland.

"Planes fly the same routes day in, day out," he said. "You don't tend to put... missiles next to international airways for obvious reasons."

He added: "It could be a bomb or it could be some sort of catastrophic breakup of the aircraft."

The aircraft was not one of the MAX models fitted with anti-stall systems that have been linked with two other recent crashes of Boeing 737s.

Boeing, which has been roiled by a nine-month crisis after the 737 MAX model was grounded, tweeted on Wednesday: "We are in contact with our airline customer and stand by them in this difficult time. We are ready to assist in any way needed."

UIA vice president Igor Sosnovskiy told reporters in Kiev that the airline doubted its crew was at fault.

"(The chances) of a crew error are minimal, we simply are not considering them," he said.

- Black boxes recovered -
A statement posted on the Ukrainian embassy website in Iran saying the crash was caused by an engine malfunction and ruling out an act of terror was later redacted, saying all information would be provided by an official commission.

A Ukrainian source told AFP the statement had been changed because the embassy had used unverified reports.

Iran's civil aviation authority said search-and-rescue teams had found the airliner's two black boxes but that it would not hand them over to Boeing or US authorities.