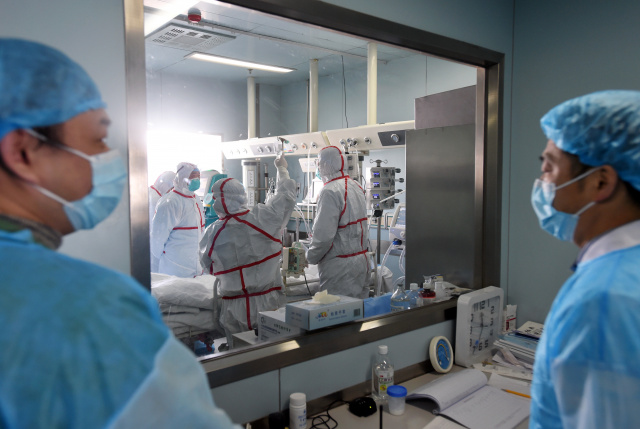 This photo taken on February 12, 2017 shows an H7N9 bird flu patient being treated in a hospital in Wuhan, central China's Hubei province. A number of provinces in China have stepped up efforts to prevent H7N9 avian flu following reports of scattered human cases of the virus, state media reported. (STR / AFP)

(AFP) - China believes a mysterious pneumonia outbreak that has struck 59 people is due to a new strain of virus from the family of pathogens that includes SARS, state media said Thursday.

The infection was first confirmed on December 31 in Wuhan, a central Chinese city with a population of over 11 million, and initially sparked fears about a resurgence of the highly contagious flu-like SARS.

Experts have "preliminarily determined" that a new type of coronavirus is behind the outbreak, state broadcaster CCTV reported Thursday, citing lab results.

"A total of 15 positive results of the new type of coronavirus had been detected" in the lab, CCTV said.

The World Health Organization (WHO) said in a statement Wednesday that a new coronavirus could not be excluded as a possible cause of the disease.

China ruled out SARS, which killed hundreds of people more than a decade ago, in a statement on Sunday.

Wuhan's health commission said on Sunday that seven of the 59 patients were seriously ill but that none had died. All patients received treatment in quarantine.