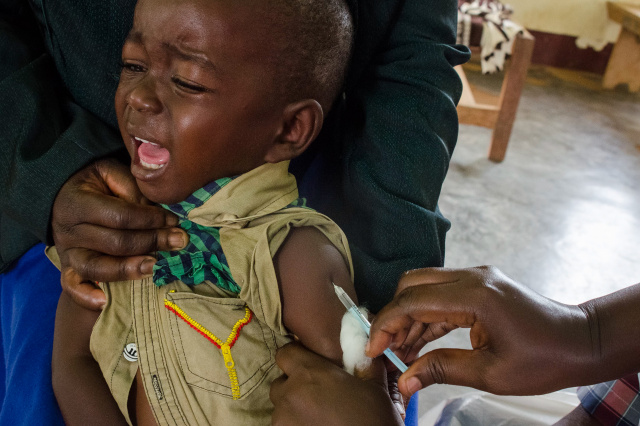 A child reacts as he receives an injection during the nationwide vaccination campaign against measles, rubella and polio targeting all children under 15 years old in Nkozi town, about 84 km from the capital Kampala, on October 19, 2019. Uganda's Ministry of health with WHO and UNICEF aim to immunize more than 18 million children in Uganda which is about 43 percent of the population during their 5-day vaccination campaign. (Badru KATUMBA / AFP)

(AFP) - Measles has killed more than 6,000 people in the Democratic Republic of Congo since January, the world's worst outbreak and nearly triple the toll in the country's Ebola epidemic, the World Health Organization said Tuesday.

DR Congo declared its latest measles epidemic in June, and last September the country launched an emergency vaccination campaign to counter the outbreak.

In 2019, more than 18 million children under the age of 5 were vaccinated across the DR Congo, the WHO said in a statement.

Around 310,000 suspected cases were reported during the year, it said.

WHO said an additional $40 million in emergency funds was needed from donors for a six-month immunisation plan for children to help curb the epidemic.

Efforts to halt the spread of both Ebola and measles are hampered by a lack of access, weak health care and unrest across the country, especially in the east.

Measles is a highly-contagious disease caused by a virus that attacks mainly children. The most serious complications include blindness, brain swelling, diarrhoea, and severe respiratory infections.

The rapid spread of measles in DRC has garnered far less attention than the Ebola epidemic that has also been raging in the east of the country since August 2018. That outbreak has killed more than 2,230 people.

Africa » Be a reporter: Write and send your article » Subscribe for news alert
Tags: DRCongo, health, measles, epidemic, WHO

Seychelles at 250: the history of epidemics and the island nation