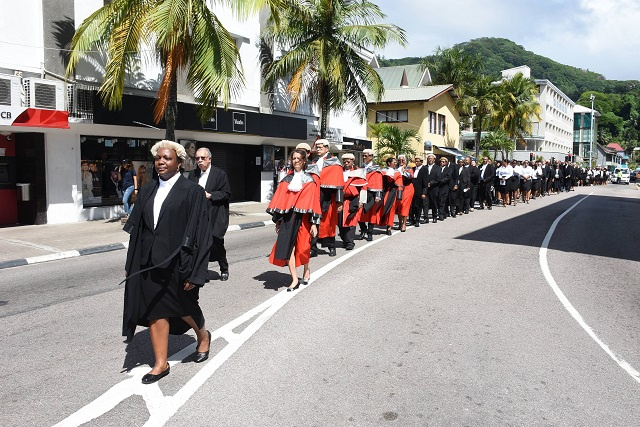 The church service was followed by a procession through the island nation's capital led by the chief justice. (Seychelles Nation)

(Seychelles News Agency) - The Chief Justice of Seychelles' top court said Friday in an address to mark the opening of the 2020 term that she intends to step down at the end of her mandate.

Mathilda Twomey, who was sworn in as Chief Justice in August 2015, started her address by saying that "this is my fifth speech for the opening of the court, my first alongside my brothers and sisters from the Court of Appeal, and my final as Chief Justice of the Supreme Court."

Twomey said that when she was asked to take up the position she did it on the condition that it would be for a five-year period and that the court would get all of the institutional support needed to make the changes required.

"And so this year I am going to honour my commitment and step down from the position as Chief Justice, and concentrate my efforts as Justice of Appeal. I believe that change is important, it brings with it fresh impetus. Another Chief Justice might have different ideas for new reform and maybe make further improvements to our judiciary," she added.

Twomey also announced that the President of the Court of Appeal, Francis MacGregor, will be retiring after 12 years at the helm of the apex court.

The court opened under a new theme -- 'Commitment and Courage' -- to reflect the ability to make decisions and stick to them -- a banner under which the Supreme Court will function as it reconvenes in the new year.

"In 2020, it is my hope that each and every one of us will commit ourselves to being brave and courageous and meet our duties and obligations head on. This is particularly important as 2020 is an election year and we have seen that the courtroom becomes an important place to resolve political disputes," said Twomey.

She said that courage and commitment need to be constant, especially for judges as this is what it takes "to wake up every day, and know that you will be tested, personally, professionally and intellectually. We are servants of an institution – not individuals. Commitment is also essential. Commitment to the law, to our colleagues and ourselves."

As is custom every year, the re-opening of the court started with the traditional religious service at the St. Paul's Cathedral of the Anglican Church. The service was followed by a procession through the island nation's capital led by the chief justice.

The ceremony proceeded to the Palais de Justice at Ile du Port, a man-made island on the outskirts of Victoria, the capital of Seychelles, an archipelago in the western Indian Ocean. It included an inspection of the guard of honour at the entrance of the Palais de Justice by the Chief Justice.

The judiciary will soon release its report for 2018 and 2019 which will give all the details of court performance during the past years, and the strides made towards eliminating the backlog.

Reflecting on the past two years, Twomey said the Courts have reduced the remaining backlog by close to three-quarters from 400 backlogged cases pending on January 1, 2018 to 112 cases on December 31, 2019.

"Presently, in the Supreme Court, the average age of the cases on the Civil cause list is 389 days, down from 499 at the beginning of last year. In the Criminal division is 328 days down from 427 the year before," she said.

Across the Judiciary, 4,239 cases were filed in 2019 and 4,043 were completed. This excludes statistics from the Family Tribunal which had 1,170 cases filed in the year, and 722 cases completed and which does not include cases that remain open for review.

Another area that will be addressed is the Supreme Court Practice Directions that are not functioning as planned.

"I will continue to ensure that Judges and lawyers are held accountable through the correct channels. We will look to formalise the structure of our judicial and legal practitioner's training," she said.

The judiciary will also review the functioning of the judicial committees and specifically to address ongoing difficulties with the use of technology and digital case administration system.

She said a new website will be launched this year to improve public access to the courts and ensuring that the judiciary is complying with the Access to Information Act.

Twomey issued a challenge to judges and attorneys at the end of her address.

"Judges, I challenge you to hold each other accountable and have each other's backs. Apply the rules and play by them. Attorneys, I would honestly recommend that you consider getting more support. We see on a daily basis that those working in partnerships or chambers are better able to make their deadlines and hearings."

She said that most importantly if there is a wrong in the system, not to turn a blind eye "even if you might feel that you are compromised because you appear before that judge because the complaint is against your lawyer or colleague and even if it might affect a future appointment."

"The enemy to "courage" is indifference, and to "commitment" is exhaustion. We must actively guard against both," she added.