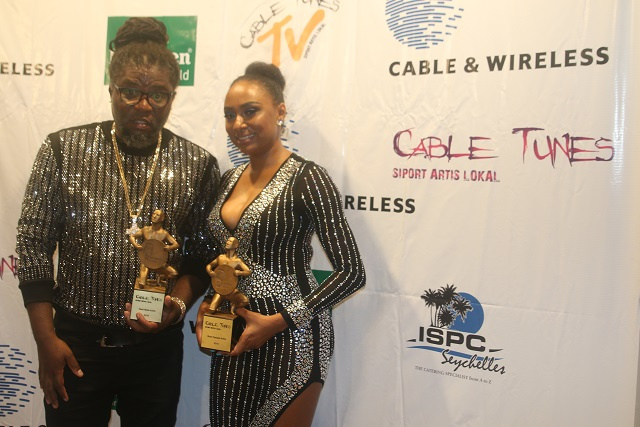 (Seychelles News Agency) - Mia and Elijah were named the Best Female and Best Male artists at the Cable Tunes Awards 2019.

The two artists received their awards at a ceremony at Berjaya Beau Vallon Hotel on the northern side of the main island Mahe on Saturday evening.

Upon receiving her award, Mia thanked God for her talent and for being beside her always.

She said the award represents the hard work and devotion that she puts into her music.

"I thank everybody who has worked with me, and this includes my crew, makeup artist, video producer just to name a few," said Mia.

Mia, whose real name is Mina Telemaque, is a newcomer on the music scene. She launched her debut album 'Prezan' with the Relations band in 2018 which immediately made her a household name in the archipelago in the western Indian Ocean.

She won the 'Best Female Artist' of 2018 at the Takamaka music awards.

Elijah – a well-known singer with a number of local hit tracks — not only nabbed the award for Best Male artist, but also the award for 'Best Performance.' He gave an electric performance at the award ceremony with his dancing crew.

"I am very happy to have won the award. It shows that people have appreciated my work and what I am doing in general as an artist," said Elijah.

The Best Male Artist said the shows that he has worked hard during the 2019.

Richie said that "this is only the beginning for me. The year 2019 was not easy and this year would mean more work from Richie B."

Other winners at the Cable Tunes Award were Mercenary once again for Best Selling artist; Yhoni and Maria  for Best Duo; Xtra Big for Best Album; and Salim Ally for Best Video Producer.

Cable Tunes is a mobile phone service award offered by Cable and Wireless Seychelles in support of local artists. Clients purchase local songs made into ringtones and get the chance to vote for the artist of their choice for the award ceremony at the end of each year.