Going nuts for Seychelles! Bringing the exotic taste of rare nuts to the world, all set for Praslin’s culinary and arts festival 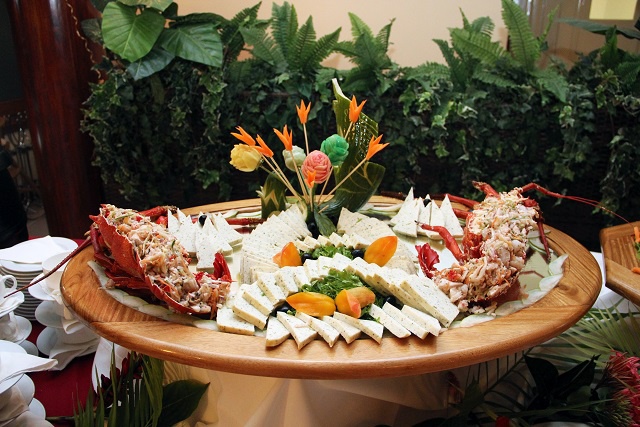 (Seychelles News Agency) - In spite of being edible, the fruit of the largest nut in the world, the coco de Mer is not commercially available in Seychelles, largely due to the fact that there are strict laws governing the possession and distribution of the nuts.

Laws to regulate and control the exploitation of the precious nuts have been in force for years and most recently, in January 2013, people owning coco de mer trees and nuts were given an ultimatum to have their trees and nuts registered while coco de mer dealers were also called to ensure that their license were in order.

These measures followed an increase in coco de mer thefts at the UNESCO World Heritage site of Vallee de Mai on the Seychelles second most populated island of Praslin, where the nuts grow naturally.

Ove the years, the introduction of licenses have allowed for the dried kernel of coco de mer to be exported mainly to Asian countries like China where it is believed to have aphrodisiac properties.

“The nuts have always had more value than the inside, which is why it is still being poached today,” said Marc Jean-Baptiste, an avid conservationist, when contacted by SNA.

“In the old days, the kernel were boiled and used as traditional medicine for heart diseases amongst other ailments, others thought it has aphrodisiac properties but mostly it was chopped off to feed to the livestock,” explained Jean-Baptiste, who further stated that the inside “was never edible once the nut had hardened.”

From solid rock to recipe ingredients

All this could change now that a new festival is seeking to bring the taste of the dried kernel to the Seychellois public and visitors to the archipelago.

The ‘culinary and art fiesta’ which was officially launched Friday afternoon will be held on Praslin from September 5-7, 2014.

The aim is to create an event that is unique for the island that has a small population of around six thousand people.

According to Richard Mathiot, the Principal Lecturer at the Seychelles Tourism Academy (STA) who is also helping the Seychelles Ministry of Tourism and Culture to spearhead the event, together with other colleagues from the STA they have worked to process the kernel several times using different techniques and have it transformed into an ingredient that can be used in recipes.

This nut belongs to the people of Seychelles and “everyone will have the chance through this festival to taste the recipes we have made using coco-de-mer, but it’s not only about the kernel, it’s about bringing value to something that we were throwing away,” explained Mathiot in a press conference on Friday to launch the culinary and art fiesta together with officials from the Tourism authorities. .

The festival will also be an opportunity for people to participate in cooking competitions, art exhibitions as well as traditional and modern music shows.

Culinary and arts Fiesta a unique event for Praslin

The coco-de-mer is listed as an endangered species, by the International Union for Conservation of Nature (IUCN), the main authority that classifies the status of species around the world.

This is mainly due to the length of time, on average 25 years, that the palm takes to become a mature plant. From thereon, a female tree can produce several nuts at a time, each weighing with their husks, from 5 to 25 kilograms.

The strange shape of the nut, have been a source of inspiration to many international companies that have replicated it, with the smaller versions featuring as designs used in necklaces, slippers, chocolates, amongst others creations.

Considering how valuable the nut is the Seychelles Minister for Tourism and Culture, Alain St Ange, has expressed the hope that “in due course, a coco de mer dish would be sold at premium price in Seychelles because it is the only place in the world where we can have it.’

“By putting the island of Praslin and its precious nuts into the limelight, this will get more people on the island to feel that this is ours,” said St Ange while urging the islanders to continue protecting the nuts answering a question on the danger of over-exploiting the already vulnerable coco-de-mer.

Praslin’s culinary and arts fiesta with its coco de mer being the highlight of the festivities comes only two weeks after the annual feast on the Assumption on neighbouring third most populated island of La Digue.

This is the time of the year when the usually laid back island welcomes hundreds of visitors that fill up every single hotel accommodation of the island.

Albeit, attracting almost 60 percent of the total number of visitors arriving in Seychelles, with an assortment of hotel establishments and renowned beaches like Anse Lazio,which earlier this year featured in TripAdvisor’s Travelers' Choice awards as one of the Top 25 beaches for 2014, Praslin was yet to have its own annual event which could be marketed on the international arena.

Can the upcoming Praslin culinary and arts fiesta become Praslin’s version of the La Digue feast?