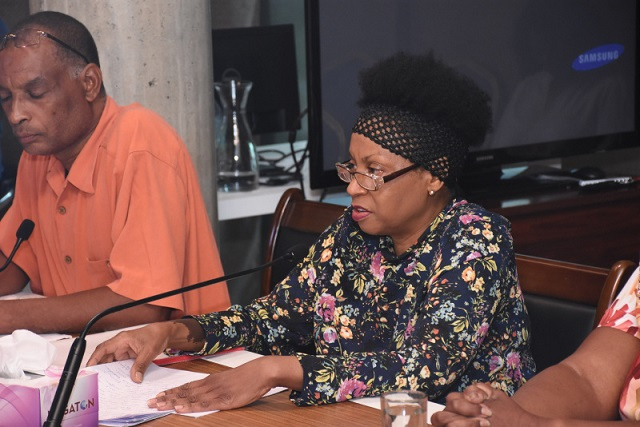 Juan Salamon and Myrna Rose-King made the plea during their testimonies before the Truth, Reconciliation and National Unity Commission on Monday. (Thomas Meriton, Seychelles Nation)

(Seychelles News Agency) - The children of the late Marjorie Baker, a Seychellois journalist who was murdered in 1986, have appealed to anyone with information about her death to come forward.

Juan Salamon and Myrna Rose-King made the plea during their testimonies before the Truth, Reconciliation and National Unity Commission this week as they recounted the events which they said may have led to their mother's death overnight Sept. 5-6, 1986.

Salamon and King, who were accompanied by their aunt, Fleurange Mchan, at the Commission's Headquarters, in Perseverance, said they wanted justice for their mother.

Baker was found dead in her car, and the autopsy report said there were seven stab wounds to her body.

"We were living during a difficult time in Seychelles and we could not come forward to seek justice and speak about her murder. We thank God that we can have the chance to talk about this tragic event today and we hope that with God's grace, we can learn more about what led to our mother's death and who was responsible," said King.

Baker – a mother of three – was in charge of Seychelles' only radio station at the time of her death and was a renowned producer and presenter. She was the person on duty on June 5, 1977, and was the one who was on air to announce the coup d'etat.

According to her children and sister, she was closely linked to the late President France Albert Rene.

Baker's sister alleged her sister may have been killed after she learned of a plot by some army officers to overthrow President Rene.

Mchan, who was working as a police inspector at the time in the Criminal Investigation Department, learned about the plot and leaked the information to her sister, not knowing that she would be seen as a threat.

Baker's colleague and also former partner -- Douglas Cedras -- was convicted of her death.

In a 16-page letter, purportedly written by Cedras in November 1986, and read out before the Commission by Baker's son, Juan Salaman, Cedras confessed to luring Baker to the site where she was to be picked up by three men.

Cedras wrote that the men had threatened to kill him and his family if he did not do as he was asked. He said the sole purpose of the meeting was to scare Baker, as they felt she was passing on information to former President Rene.

He wrote that things escalated when they met with the three men late on September 5, 1986, and that when he left and he was dropped off at his home at Glacis and Baker was still alive.

Cedras wrote that he was framed for the murder as the knife used to stab Baker was his and had been planted on the body.

Baker had three children, an older daughter Betymay, a son Juan who was working in the United States at the time of his mother's death, and younger daughter Myrna Rose King.

King was the only person living with her mother at La Louise at the time of her death.

She told the Commission that on the fateful day, she received numerous phone calls late in the afternoon from a man who wanted to speak to Baker.

"The person was very arrogant and sounded annoyed when I told him that my mother was not home yet. When she reached home and I told her about the phone calls, she didn't comment on the matter," recalled King.

The family said they recognised Cedras' part in the murder of Baker but does not believe he was the one who murdered her.

They have appealed to anyone with information about what transpired to come forward.

"We believe there are people out there who might know what happened that night and who are responsible for our mother's death. We are appealing to you to please come forward," said King.

Cedras, who was convicted and sentenced to life imprisonment for Baker's murder, received a presidential pardon seven years after the murder. He died in 2014.

The Truth, Reconciliation and National Unity Commission is listening to complaints and grievances related to the coup d'etat. It has a three-year mandate.