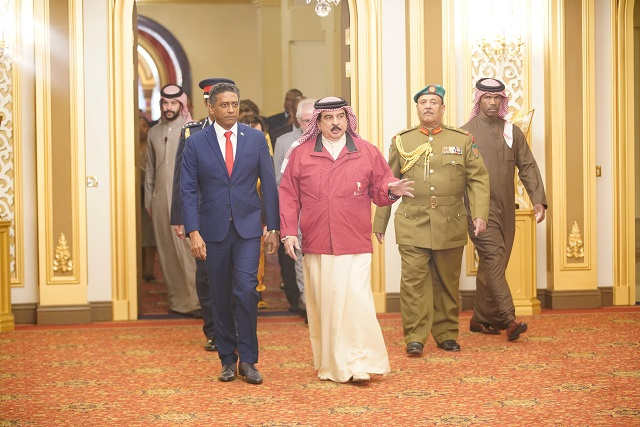 (Seychelles News Agency) - Seychellois holding diplomatic, special and official passports will not require visas when travelling to Bahrain after the signing of a visa waiver agreement during a first-ever state visit of President Danny Faure.

According to State House, the visa waiver agreement is the first phase of expanding cooperation for this category of passport holder which will promote further development of bilateral relations between the two countries. Further discussions on the second phase to extend the visa waiver for general passports holders is ongoing.

The President is on a two-day state visit to Bahrain from January 15-16.

On the first day of his visit on Wednesday, Faure held bilateral talks with King Hamad Bin Isa al-Khalifa.

"This is the first state visit by a President of Seychelles. Today is a historical day for my country and a turning point in the relationship shared between our two nations. Thirty-six years since we established diplomatic relations, I am here to further cement the warm ties between Seychelles and the Kingdom of Bahrain," said Faure.

During discussions, the two leaders acknowledged the extent of development which the two island nations have accomplished during the past decade in the common pursuit for prosperity of their people.

"I am certain that this visit will yield more possibilities for cooperation between Seychelles and Bahrain and I look forward to the results," added Faure.

Bahrain and Seychelles, a group of 115 islands in the western Indian Ocean, signed other agreements which included a general cooperation agreement and one for cooperation in tourism.

The Central Bank of Seychelles (CBS) and the Central Bank of Bahrain also signed an agreement through which sponsorship of two scholarships to the CBS by the Bahrain Islamic Banking and Finance (BIBF) Training Institute were confirmed.

Bahrain has also pledged to further support Seychelles in its maritime security efforts through the donation of two boats for Coast Guards.

Seychelles and Bahrain established diplomatic relations on 4th May 1983.