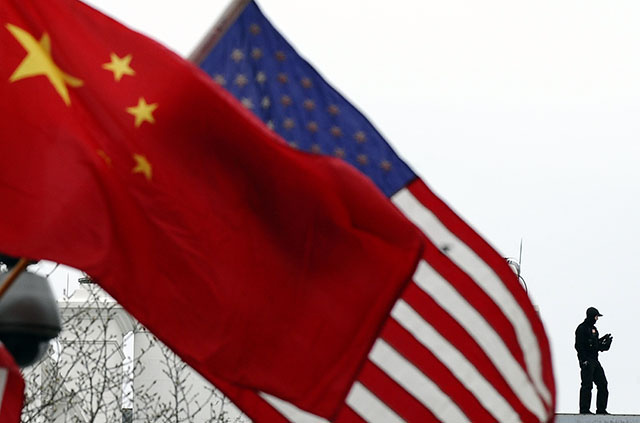 (FILES) In this file photo taken on January 17, 2011 A Secret Service agent guards his post on the roof of the White House as a lamp post is adorned with Chinese and US national flags in Washington, DC, prior to Chinese President Hu Jintao's state visit.

(AFP) - Asian markets fluctuated Thursday as details were released of the China-US trade deal signed in Washington, with analysts saying it would allow investors to turn their focus to the global outlook and earnings season.

After years of painstaking on-off talks between the economic superpowers, US President Donald Trump finally put pen to paper on an agreement that lowers tensions between the two and provides a major boost to the global outlook.

Equities have been rallying since last month's announcement of a deal to de-escalate a long-running stand-off that has jolted growth around the world and fanned fears of recession in some countries.

The pact -- the first part of a wider agreement -- includes pledges from Beijing to boost purchases of US agricultural goods and other exports for two years, protects US technology, and provides enforcement mechanisms allowing Washington to impose penalties that Beijing cannot respond to.

In return, the US has cut tariffs on some Chinese products and cancelled others that had been lined up, though levies remain in place on goods worth hundreds of billions of dollars, which Trump said will stay in place until the next phase of talks is complete.

The president hailed it as a "momentous step", while Beijing cautiously welcomed the "hard-fought agreement" but warned of uncertainties ahead owing to the countries' fraught relationship.

Still, Wall Street ended with healthy gains, with the Dow and S&P 500 hitting records, but Asian markets swung through the day.

"Given the amount of speculation by the markets and commentary by officials ahead of Wednesday's signing, it is unsurprising markets have not rallied too strongly upon final signing," JPMorgan Asset Management strategist Hannah Anderson said.

"In the US, investors largely seem to have accepted this pause in escalation and gotten back to focusing on fundamentals, like what the ongoing earnings season tells us about the outlook for the US equity market. Asia investors are likely to take the same approach."

But, she added, while the agreement was a big positive, "we should all be aware that headlines about trade, particularly US-China trade, are going to be a constant feature of 2020".

There was also a concern that with the deal already priced into markets, there were few catalysts to drive stocks higher, while "phase two" negotiations -- expected to be the toughest -- are unlikely to start in earnest until after November's US presidential elections.

"The main benefit of the deal is that the US and China frictions are unlikely to worsen in the coming months, so we have reached a peak tariff of sorts, and this will allow traders to return focus on other things."

Michael Hewson at CMC Markets UK added: "Given that it has taken nearly two years to pick off the low hanging fruit of a phase one deal, it does stand to reason that phase two is likely to take much longer."

The easing of China-US tensions provided a broadly positive mood on trading floors that benefited higher-yielding or riskier currencies.

The Chinese yuan extended recent gains by 0.1 percent while the Indonesian rupiah and Australian dollar were up 0.3 percent each.

The safe-haven yen dipped against the dollar and gold was flat.

Hopes for a pick-up in demand as the global economy improves also helped oil prices rise, with both main contracts posting healthy gains, though signs of increasing US inventories kept the commodity anchored.