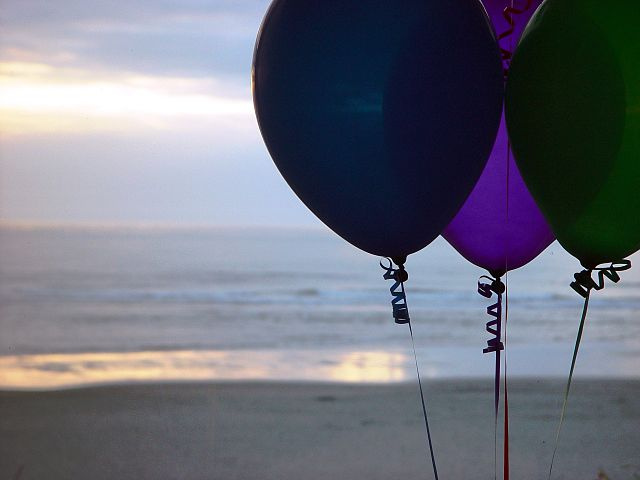 Kurova said that balloons pose a significant threat to marine life, particularly turtles and seabirds which often mistake them for their favourite prey. (Brian Glanz, Wikipedia)  Photo License: CC BY 2.0

(Seychelles News Agency) - The group Ocean Project Seychelles has launched a new campaign targeting the use of balloons on the beaches which pose a significant threat to marine life.

The campaign '#SeyNoToBalloons' is to raise awareness about the negative impacts of balloons on the environment and highlight eco-friendly alternatives.

The project manager of Ocean Project Seychelles, Kristina Gurova, said that Seychelles is home to many species of birds, turtles, and many other unique and endangered forms of marine life.

"We should be taking concrete measures to prevent balloons from entering our fragile ecosystems in order to safeguard our biodiversity," she said.

Balloons in Seychelles, an archipelago in the western Indian Ocean, are commonly used year-round in celebrations.

Kurova said, "Though we have grown accustomed as a society to seeing balloons as synonymous with celebration, there is a sinister side to this party staple. Balloons pose a significant threat to marine life, particularly turtles and seabirds which often mistake them for their favourite prey, jellyfish and squid."

The Ministry of Environment told SNA that it is supporting the initiative as balloon is on its target list.

“They are targeting balloons on the beach which is a step forward. We see it as a good initiative because it is not possible for us to do it all ourselves. We are encouraging other organisations especially NGOs to get the public involve,” said Nanette Laure, director general for waste, enforcement and permit.

She added that “now that Ocean Project is doing the campaign, as the environment authority we give them as much support as we can. If we can we also participate.”

Two common types of balloons on the market are made from either mylar or latex. The former is completely non-biodegradable while companies often market latex balloons as being biodegradable and therefore eco-friendly.

Gurova said such claims can be misleading and that "a latex balloon can take anywhere between six months to four years to actually decompose – giving them plenty of time to wreak havoc on the environment."

She said that despite its natural origin, latex rubber does not degrade quickly enough for ingestion by marine life to be avoided and "that is why we as consumers need to be wary that biodegradable does not mean harmless."

Balloons and ribbons along with the entanglement and choking risks that they pose to wildlife are left behind to be either taken by the tides or blown away by the wind into the ocean, said Gurova.

The Ocean Project Seychelles, a not-for-profit group, is not only campaigning about the use of balloons but is proposing alternatives such as paper lanterns, kites and bunting.

"These alternatives are not only better for the environment, but they are also better for consumers' pockets as they can be enjoyed again and again," said Gurova

Seychelles, a group of 115 islands in the western Indian Ocean, is not the first country to campaign or legislate against the use of balloons. A number of states in the U.S and other territories like Gibraltar have already passed or are considering laws banning the release of helium balloons.

Ocean Project Seychelles said that taking a similar step here in Seychelles would help establish the country as a regional and even global leader in the environmental movement.

Already in Seychelles some businesses like the Boardwalk Bar Les, Lauriers Eco Hotel and Restaurant, and Oscars Beach Bar and Grill, has shown interest in endorsing this campaign.

Founded in 2016, Ocean Project Seychelles has become a leading advocate for the protection of the environment in the island nation. Their mission is to protect the oceans through education, action and research.