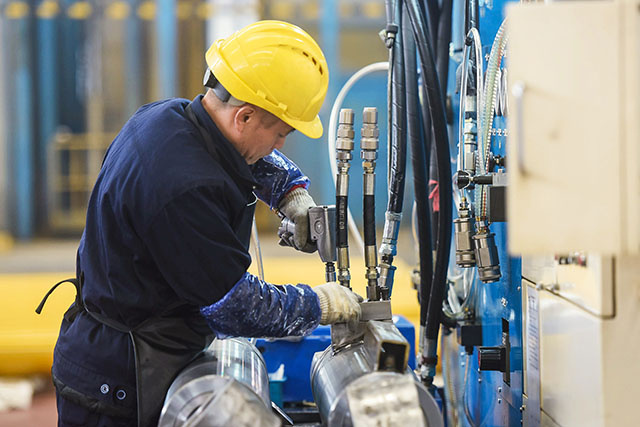 An employee works on a cylinder production line at a factory in Hangzhou in China's eastern Zhejiang province on January 17, 2020. China's economy weakened to its slowest pace in three decades in 2019 as weaker domestic demand and trade tensions with the United States took their toll, official data showed on January 17, 2020. STR / AFP

The 6.1 percent rate is a sharp drop from the 6.6 percent the year before and marks the third straight drop, though it met the government's target and analysts said leaders were unlikely to open up the stimulus taps just yet.

The reading was also in line with AFP analyst forecasts.

And while the world's number two economy had been gradually losing steam over the first three quarters, growth held steady at 6.0 percent in October-December -- the same as the previous quarter, according to the National Bureau of Statistics.

Ning Jizhe, commissioner of the NBS, said momentum remained generally stable through the year and said the same could be expected in 2020.

"However, we should also be aware that the global economic and trade growth is slowing down," he said at a news conference, adding that there were more sources of instability and risk, with the economy facing "mounting downward pressure".

The figures were released days after Vice Premier Liu He and Donald Trump signed a much-vaunted "phase one" pact that marks a truce in their nearly two-year-old trade war.

The agreement will see the US slash import duties on Chinese goods worth billions of dollars, though levies remain in place on two-thirds of more than $500 billion of products.

The World Bank said in a report this month that weakening exports from China had compounded the impact of a slowdown in domestic demand. Policy uncertainty and higher tariffs on exports to the US also cast a pall on manufacturing activity and investor sentiment, it added.

Other data released Friday showed while industrial production and retail sales slowed over the year, both indicators outperformed in December, with the NBS pointing to a particularly strong showing in consumer spending.

"The latest ... data provides a very positive start to the Chinese New Year for China’s economy," Rajiv Biswas, of IHS Markit, said. "The outlook for 2020 is for continued robust growth, boosted by the phase one trade deal with the US and the continued positive impact of government monetary and fiscal policy stimulus measures."

But analysts note that China's slowdown is structural, as it becomes a more developed economy and faces demographic challenges such as a shrinking number of people of working age.

Faced with an ageing population, Beijing relaxed its one-child policy in 2016 to allow people to have two children, but it has not led to more births.

Still, Louis Kuijs, head of Asia economics at Oxford Economics, told AFP that Beijing considers the slowdown part of a "new normal" and that major easing is unlikely, given the improving global outlook and the US trade deal.

He noted policymakers likely want to keep their powder dry, aiming for a stabilisation rather than reigniting growth, adding: "What they don't want to see is a too-rapid slowdown."

Analysts and officials are expecting the economy to level out this year.

Kuijs noted the trade deal bodes well for exports, as well as sentiment on business investment and consumption. It also reduces the risk of escalation and "severe decoupling" in other dimensions such as restrictions on companies and finance.

But UOB economists Ho Woei Chen and Peter Chia said in a recent note that the deal is unlikely to catalyse a strong rebound in growth for China as the bulk of US tariffs remain in place.

Last month, the NBS said China would revise its historical regional GDP data under a unified accounting mechanism to be introduced early 2020.

This is expected to close a discrepancy between national and regional figures and enhance the credibility of government statistics, according to state media.