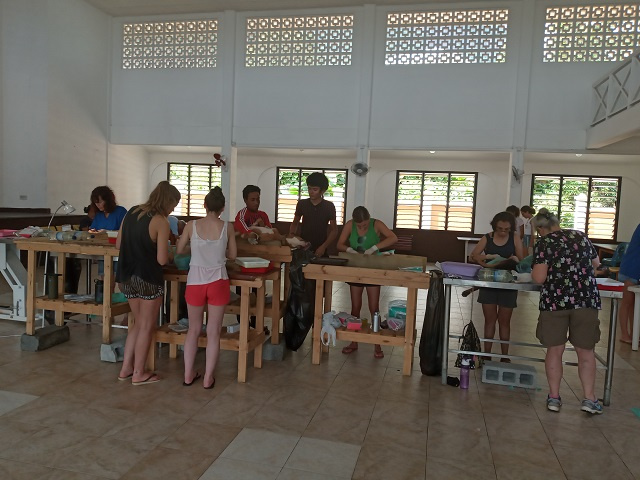 (Seychelles News Agency) - A nationwide campaign is under way in Seychelles to sterilise dogs and cats ahead of a new law for the control and protection of dogs that goes into effect March 1.

The campaign started last Thursday and over nine days the group plans to sterilise and microchip over 1,400 animal on the three main islands -- Mahe, Praslin and La Digue.

As of March 1, the Control and Protection of Dogs Act 2018 phase one will begin which will include the registration of dogs and dog owners. This will allow the National Biosecurity Authority -- authority mandated to implement the legislation -- to know how many dogs there are on each plot of land.

The exercise is an initiative of the island's animal welfare group, the Seychelles Society for the Prevention of Cruelty to Animals (SSPCA), with the assistance of the UK-based organisation Spay Sisters.

This is the second time Spay Sisters is carrying out a culling exercise in Seychelles, a group of 115 islands in the western Indian Ocean. The first one was done in January last year when 1,029 animals were sterilised.

"Part of our mandate is to educate and sensitise pet owners on how to be more responsible and we are happy that a lot of people have responded to our call to sterilise their animals to prevent unwanted litters which most of the time are abandoned by the roadsides," said Marie.

Set up in 2006, Spay Sisters, a group of 10 women vets and veterinary nurses from Britain, travels around the world to sterilise dogs and cats and at the same time educate the population on how to treat and care for their animals

The 11-member team taking part in this year's campaign is led by head vet Ella Stekly. She said Spay Sisters agreed to come back for another campaign on condition that there was a stronger law which protects the animals and ensure pet owners become more responsible.

"We're very excited and happy because when we were here last year it was already amazing. However, we did explain that in order for us to come back, you need to change the law and there needs to be some idea of ownership of the animals. So we're happy that something's changed in the past year," said Stekly.

In addition to the sterilisation, the dogs are also being microchipped at a minimal fee of SCR50 ($4). When the law comes into force on March 1, the fee will increase to SCR500 ($37). The microchipping which will keep track of dogs is being done by the National Biosecurity Agency.

Marie said this will not only help to recover stolen animals but will make owners more responsible as they will be held accountable for their animals' action.

"We've also had issues with statistics. At present we don't know how many dogs there are in the country so once they are microchipped we will be able to keep a record of the number of dogs," he added.

Paul Klitides is the owner of three cats and a dog named Rocket. He rescued all four animals and Rocket was the last one to be sterilised and microchipped.

"I see that a lot of people don't like animals and are not taking care of their animals which can be seen roaming around. I think that when the new law comes into force where they will have to pay licence fees, I'm afraid you'll find more dogs on the road. At least this exercise will help reduce unwanted litters," said Klitides.

For her part, 12-year old Stellfa Servina, brought all of her three dogs to be sterilised and microchipped.

"I decided to do it now as it is cheaper. Once the law comes into force it will be more expensive to microchip my animals," said Servina.

The new law hopes to reduce and prevent cruelty to dogs and curb the number of strays which have increased over the years and deal with irresponsible dog owners.

General » Be a reporter: Write and send your article » Subscribe for news alert
Tags: Control and Protection of Dogs Act 2018, Seychelles Society for the Prevention of Cruelty to Animals, Spay Sisters

Campaign to register dogs in Seychelles kicks off; goal is to reduce strays