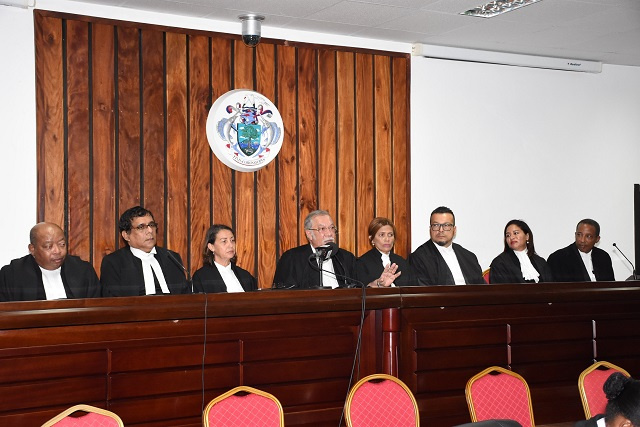 A farewell ceremonial sitting was held at the Palais de Justice on Monday for Justice Macgregor, after serving 12 years on the court. (Seychelles Nation)

‘Never walk alone’ were the parting words of Judge Francis Macgregor to his colleagues as the President of Seychelles’ Court of Appeal retired from the bench.

A farewell ceremonial sitting was held at the Palais de Justice on Monday for Justice Macgregor, after serving 12 years on the court.

The ceremony, held in the presence of the Chief Justice Mathilda Twomey, other judges as well as by lawyers, was one where Macgregor was paid tribute for the 47 years he spent as a lawman.

Justice Macgregor holds an LLB and is a member of the Middle Temple. Upon his return to Seychelles in 1973 he worked in private practice until 1979 when he was appointed as director of State Legal Service for the public.

Macgregor also served as a member of the Constitutional Commission and was the first Speaker of the National Assembly of the Third Republic from 1993 to 2007. From 2007 to 2019 he was occupying the post of President of the Court of Appeal.

In her address, Lady Justice Twomey retraced the career of Macgregor and said that in line with the constitution the Judge has to retire as he turns 70 on January 26.

The former President of the Courts of Appeal said that he will only be retiring from the bench.

“I have already set up an office at home and am making arrangements for another temporary space where I will continue to offer my services as a consultant,” said the Judge.

In October last year, Macgregor made an important contribution to the country’s history and literature, when he launched his book ‘History of the Court of Appeal’.

Macgregor said he would write more books, as he has enough research materials for several.

“I am not in a hurry and I have all my time. But I have done the groundwork for a publication on the law for people who live as concubines, so I need to work on this book as these people as well as their children who are considered illegitimate need some sort of protection,” said the judge.

Speaking on his success with the court, the Judge said that he is happy with the number of cases they have managed to deal with from 14 per year when he took over the court to currently over 70 cases per year.

During the ceremonial sitting, many of Macgregor's colleagues talked about his achievements and good attributes.

Justice Fiona Robinson - a colleague of Macgregor at the court - said that he chose two very people-oriented careers in law and politics. She quoted Macgregor as saying that “he was humbled to have lead the court of appeal.”

Pesi Pardiwalla who studied law together with Macgregor in the United Kingdom said he is looking forward to joining him in retirement.

Bernard Georges had Macgregor as his boss when he did his pupilage 40 years ago. He also shared his early days as a junior member of the National Assembly where Macgregor was the Speaker and whom he described as gentle and who did not like confrontations.

On a parting note, Justice Macgregor called for unity in Seychelles - 115 islands in the western Indian Ocean.

“I want to see a more peaceful Seychelles. Even if we do have different opinions, we do not have to hate each other, or quarrel about it. I want to see a Seychelles just like that! And I want our leaders to bring this forward, instead of letting whatever is posted on social media spread division.”