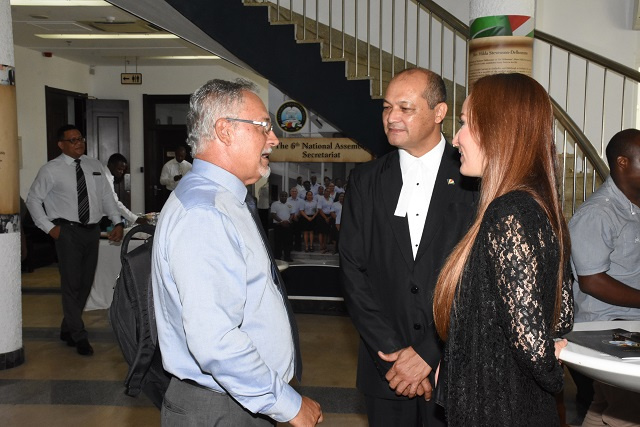 Gabriela Cuevas Barron spoke at a special session of the Assembly on Tuesday.

"IPU as one of the oldest and largest parliamentary organisations in the world believes in the values of democracy and human rights as it is the best way that we can take decisions for our country and grow as a society," said Barron.

She said that the Union has been there in the most complicated moments of the planet and has been involved in resolving disputes.

"Today the planet is not the same as before. Today we are seeing inequality, poverty, hunger and a lot of conflicts around the planet. As parliamentarians we can also say that politics are changing and the change is good in order to ensure delivery to the people that we represent," said Barron.

Barron, who is Mexican, is the second woman and the youngest person to be President of the Inter-Parliamentary Union since its foundation in 1889. Her visit is the first time a President of the IPU has made an official visit to Seychelles, an archipelago in the western Indian Ocean. Barron, who was elected in 2017, is on an African tour in the last of her three-year mandate.

In her address, Barron also talked about the challenge to give women a more participatory role in politics and in parliaments.

"If we look at the statistics worldwide there are only 24 percent of seats for women. This is not an inclusive approach. We need more woman in politics," said Barron.

She said the same applies to the youth. Only 2.2 percent of parliament seats are served by someone under 30, she said.

"Having the youth assembly in Seychelles is a great step and opportunity to include and groom the youth to take politics as a career," added Barron.

Barron concluded in saying that IPU has a responsibility to give politics a new meaning.

"We need to preach our values, preach our commitment, decide if we are the generation that will kill or protect the planet. I believe in the power of youth, women and in the force of Africa," she said.

During her visit, Barron also paid a courtesy call on President Danny Faure and the two Leaders in the National Assembly on Tuesday.

The representative of the opposition, Jean-Francois Ferrari, said Seychelles is proud to be a part of the IPU, which has helped the island nation's parliament "to become more representative, gender-balanced, younger, transparent, accessible, accountable and effective."

Leader of Government Business, Charles De Comarmond, supported the idea that woman should play a greater role in the political development of their country.

"A great example where Seychelles is doing well with regards to integrating woman in decision-making is seen within the judiciary. We have a woman at the helm of the judiciary. We should also see that happening in our assembly and in the executive as well," said De Commarmond.

The IPU is a global organisation of national parliaments that began in 1889. There are 179 member parliaments and 12 associate members. IPU's mission is to promote democratic governance, institutions and values.