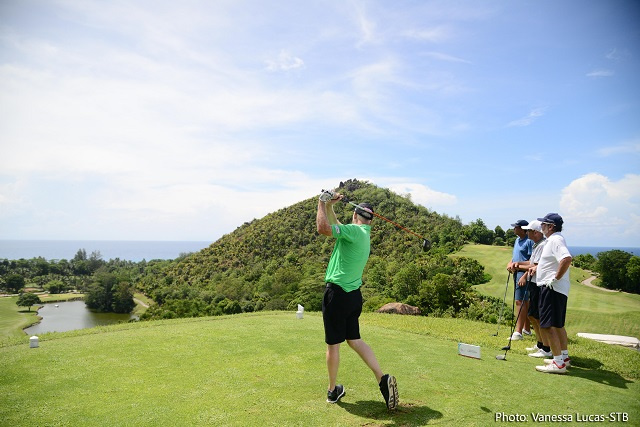 2019 was a good year for tourism in Seychelles, as the industry enjoyed a growth rate of six percent. More than 384,000 visitors came to the islands.
One of the strategies to attract more people to the islands is increased collaborations with prestigious sporting events.
SNA presents three such events held in Seychelles last year.
Seychelles Eco-Friendly marathon
The Seychelles Eco-Friendly Marathon was initiated in 2008 by the then Seychelles honorary consul general in South Korea, Dong Chang Jeong, as part of efforts to encourage people in the 115-island archipelago in the western Indian Ocean to stay healthy.
The marathon has now become an annual event that attracts locals and foreigners working or holidaying in Seychelles, as well as foreign participants who come expressly for the marathon.
Jointly organised by the Seychelles National Sports Council and Seychelles Tourism Board, the event is normally at the popular Beau Vallon beach in the north of the main island, Mahe.
FINA – Open water swimming competition
In 2018 for the first time, Seychelles hosted the International Swimming Federation’s (FINA) open water swim world series.
The open water swimming competition is a series of 10 km races in outdoor water bodies like oceans and lakes held annually since 2007. Points are awarded for each race in the series, with the points being added together for an overall winner.
The annual series is organised in over nine locations and takes place in either freshwater or sea. The event prize money is $30,000 while the overall prize is $250,000. Seychelles will host the FINA/HOSA swimming World Series for four consecutive years.
MCB Golf Tour Championship
Last year, Seychelles hosted a prestigious regional golf competition, the MCB Tour Championship - a men's senior (over 50) professional golf tournament on the European Senior Tour. It has been held every year in December since 2009.
The event is a joint collaboration between the MCB Bank and Seychelles Tourism Board and held at the Lemuria Resort on Praslin – the second-most populated island of Seychelles.
Forty-eight players participated in the event. Among the internationally known golfers were Roger Chapman of Britain, the defending champion, Clark Dennis of the United States and Paul McGinley of Ireland.
Seychelles Buzz » Be a reporter: Write and send your article » Subscribe for news alert