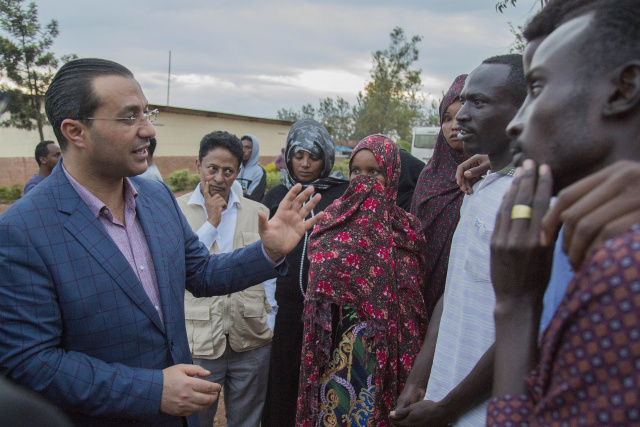 An unidentified official (L) who was among the permanent representatives of the African Union (AU) talks to a group of asylum seekers evacuated from Libya, they are currently hosted at the Gashora Emergency Transit Center in the Bugesera district, about 58 kilometres southeast of Rwanda's capital, Kigali, on October 23, 2019. Different permanent representatives to the African Union paid a visit to the facility on October 23,2019, as part of their activities including the Continental Consultative meeting on Humanitarian assistance in Africa currently taking place in Rwanda.(CYRIL NDEGEYA / AFP)

(AFP) -  The UN Security Council called Tuesday on Libya's warring sides to quickly reach a ceasefire that would pave the way for a political process aimed at ending conflict in the oil-rich state.

The United Nations meeting followed up on a weekend Libya summit held in Berlin, which saw the formation of a military commission that is supposed to define ways of consolidating a cessation of hostilities.

It is to comprise five members each from the UN-recognized government in Tripoli and its opponents loyal to military strongman Khalifa Haftar.

"The members of the Security Council urged the Libyan parties to engage constructively in the five + five military commission in order to conclude a ceasefire agreement as soon as possible," the Council said.

The North African country has been torn by fighting between rival armed factions since a 2011 NATO-backed uprising killed dictator Moamer Kadhafi and toppled his regime.

Since April last year the UN-recognized Government of National Accord (GNA) in Tripoli has fought back against an offensive by fighters loyal to Haftar, who is supported by several countries including Russia, Egypt, the United Arab Emirates and France.

The move to cripple the country's primary income source was to protest Turkey's decision to send troops to shore up Haftar's rivals.

The military commission is expected to meet in the coming days, according to the UN, tasked with turning an existing fragile ceasefire into a permanent truce as requested by the international leaders in Berlin.

The ceasefire was co-sponsored by Russia and Turkey and has broadly held since it went into effect on January 12.

The summit was attended by the presidents of Russia, Turkey, France and Egypt, as well as US Secretary of State Mike Pompeo and UN chief Antonio Guterres.

GNA leader Fayez al-Sarraj and Haftar were also there but refused to meet. The conference failed to get the two rivals to commit to a permanent truce.

At the summit the main countries concerned promised to no longer interfere in Libyan affairs and to respect an arms embargo imposed in 2011 but which has been violated.

At the end of the Security Council meeting, Guterres told reporters that "there's still a long way to go."

He said truce violations have not been widespread.

Haftar insists his military campaign is aimed at battling Islamists.