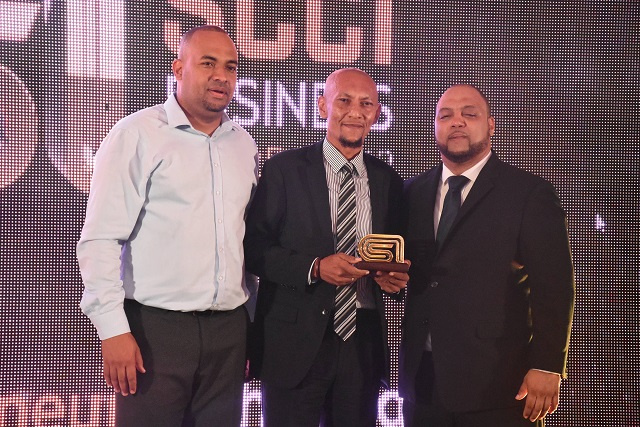 The owner of Globarom and Tropeko has won the eighth edition of the award, which is organized by the Seychelles Chamber of Commerce and Industry. (Seychelles Nation)

Mustafa Harun Bristol, a Seychellois entrepreneur who started a quest to revive the island nation’s plantation industry, has won the 2019 Entrepreneur of the Year Award.

The owner of Globarom and Tropeko has won the eighth edition of the award, which is organised by the Seychelles Chamber of Commerce and Industry (SCCI).

“It goes to show that my effort and dedication as a local entrepreneur and contributions to the economy of my country is appreciated,” said Bristol, who added: “The award will further encourage me to continue to produce quality products for the local and international markets.”

Bristol operates from his factory, Bristol Enterprise LTD, at Grand Anse Mahé, which transforms cinnamon into essential oils and other spa products under the brand Globarom while all coconut products and charcoal are produced under the brand name Tropeko.
The entrepreneur, who started his business back in 2001, is currently exporting these products to mainly European countries as well as to Canada.

Cinnamon, coconut, and patchouli were all at one time the backbone of Seychelles’ economy.

In days gone by, plantations were the main driver of the economy of Seychelles, a group of 115 islands in the western Indian Ocean.

Bristol’s latest venture is extracting essential oil from patchouli, a fragrant Asiatic plants found growing in the hills of La Misere in the western of the main island of Mahe in 1901.

First exported as oil in 1920, the leaves of the plant were exported as dried leaves in 1947. By 1952 over 11,000 kilos of leaves were shipped mainly to India.
“I commend this initiative as nowadays, people do not know of the plant. The plant can rarely be seen. But patchouli was one of the three plants which were the pillar of our economy. So kudos to this entrepreneur for this initiative as patchouli is money,” Tony Mathiot, a local historian told SNA.

Bristol added that for now his company is planting some of the patchouli but he hopes to work with farmers who can plant and help propagate the plant and ensure a constant supply.

Marsha Radegonde, who owns a farm said that this is something that farmers can look and consider as a source of extra revenue, “but that all depends on the type of soil that the plant grows better in.”

For now, the oil is being exported to France and the ​United Kingdom with Germany being explored as another potential market.


“Depending on what our clients want the oil is shipped in either glass or aluminium jars of different sizes,” explained the entrepreneur who added that the product is primarily used for cosmetics and aromatherapy.

According to Bristol patchouli oil from the island nation was “once renowned for its oil which was the best in the world and I want to revive this.”

But the entrepreneur is not content yet and his plan now is to work with aloe vera. “Aloe vera is an interesting component in cosmetics, especially skincare products. And since we are already in the business of producing raw materials we felt that it was good to incorporate it now that we are into spa products.”
Business » Be a reporter: Write and send your article » Subscribe for news alert
Tags: aloe vera, skincare, aromatherapy, cosmetics, essential oil, coconut and patchouli, cinnamon, Seychelles Chamber of Commerce and Industry, Tropeko, Globarom