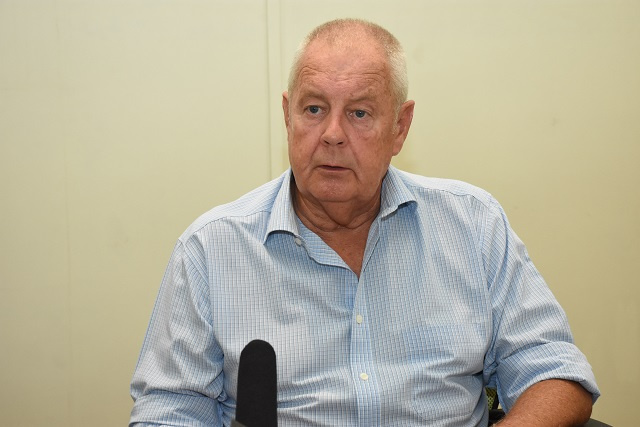 Dekker was a former member of the South African Special Forces recruited by Michael Hoare of the failed takeover mercenary attack in November 1981. (Jude Morel)

(Seychelles News Agency) - A former South African soldier who took part in the failed takeover mercenary attack on Seychelles 40 years ago said the attempt was a mistake and is asking the Seychellois people for forgiveness.

Louis Dekker, 65, was a former member of the South African Special Forces recruited by Michael Hoare -- a mercenary leader -- to participate in an operation on November 25, 1981, to overthrow the late President France  Albert Rene's government.

"I am bitterly sorry. It was a stupid, stupid mistake on my part and I just want the people of Seychelles to know that," Dekker told journalists on Tuesday after paying a visit to President Danny Faure at State House.

He said that what happened on that day has disturbed his conscience and kept him awake for many nights during the past few decades.

Dekker said that his visit to Seychelles came after a letter he wrote to Faure last August explaining his wish to ask for forgiveness and try to correct the wrongs that he and his colleagues tried to do.

"This is a matter of my conscience as things could have turned out much worse on that day. This is why it has been bothering me for so long and I decided to give my side of the events in the hope that the people will see it in the same light," he said.

State House gave no press statement on the meeting of Dekker with the President.

On November 25, 1981 a group led by South African-based mercenaries attempted a coup to restore James Mancham to power, who himself had been overthrown in a coup d'etat on June 5, 1977. After that first successful coup, France-Albert Rene, who was the then-prime minister, became President. Seychelles became a one-party state until 1993.

Dekker said that "what happened at the Seychelles International Airport on November 25, 1981 was a mistake and has disturbed my conscience and kept me awake for many nights during the past few decades."

Recounting the details of the event, Dekker said that he was foolish to have let himself be coerced by his colleagues for a job that promised a small payment and some excitement from the boredom of his office job.

He said he was led to believe that the job worth of 10,000 South African rands, would only entail overthrowing the government of Seychelles, a group of 115 islands in the western Indian Ocean.

On that fateful day, after disembarking on the Air Swazi Flight to Seychelles, Dekker said that almost all the men had gone through customs when a member of the security spotted the weapon in the luggage of the man in front of him. The security shot the man and after that, there was complete chaos.

He said that by then the mercenaries realised that the operation had been compromised after being surprised by the Seychelles' forces.

The mercenaries went back to Durban the following day and were arrested immediately after disembarking on the aircraft that Hoare had hijacked. They were charged for hijacking a commercial aircraft, a case which lasted almost a year with a prison sentence of five years.

"The South African government simply turned their backs on us and did not want anything to do with us, denying any involvement in the attempted coup," concluded Dekker.