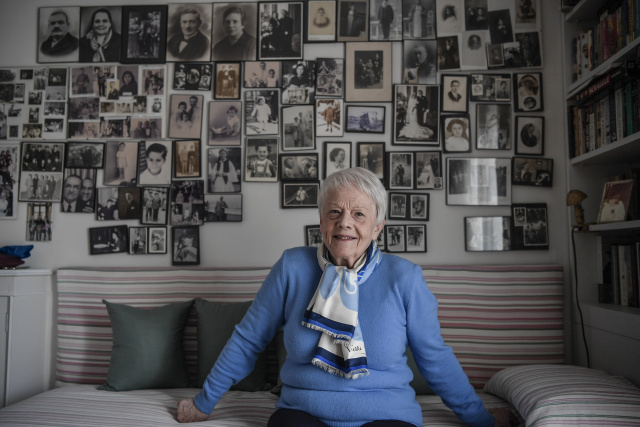 Lola Angel, 83, sits in front of the wall full of the pictures of her family, most of them saved from their home in Thessaloniki at the start of the war at her home in Athens on January 21, 2020. "I celebrated my seventh birthday inside the camp of Bergen-Belsen with a piece of bread and sticks for candles," recalls 83-year-old Lola Angel, one of the few Greek Jews left to remember the horror of Nazi concentration camps.
An approximated 83 percent of Greek Jews, nearly 59,000 people, were exterminated when the country was occupied by Nazi Germany in 1941-1944.
Most of them came from Thessaloniki, which until then had a prosperous Jewish community dating to the 15th century, and was known as the Jerusalem of the Balkans.Nina and Lola are among survivors who had not spoken until now. As they were so young at the time, they felt it was not their place to speak. But 75 years after the end of the Second World War, they finally feel ready to pass on their stories to the next generation. (LOUISA GOULIAMAKI / AFP)

(AFP) - Elderly Holocaust survivors will gather in Auschwitz on Monday, some for the last time, to mark 75 years since Soviet troops liberated the death camp where Nazi Germany killed more than 1.1 million people, most of them Jews.

Bitter political feuds loom over the memorial ceremony at the site of the former camp in Oswiecim, southern Poland, that will be attended by royals, presidents and prime ministers from nearly 60 countries, but no top world leaders.

Israel held a high-profile Holocaust forum marking the liberation anniversary in Jerusalem on Thursday, seen as rivalling the event in Poland.

While senior figures such as US Vice President Mike Pence, French President Emmanuel Macron and Russian President Vladimir Putin were in Jerusalem, none will come to Auschwitz.

Last month, Putin sparked outrage in the West after making the false claim that Poland had colluded with Nazi German dictator Adolf Hitler and contributed to the outbreak of World War II.

In fact, the war erupted after Nazi Germany and the Soviet Union invaded and carved up Poland in September 1939 under a secret clause of their Molotov-Ribbentrop Pact.

Poland's President Andrzej Duda, who has called out Putin for attempting to rewrite history, snubbed the forum in Jerusalem after he was denied the opportunity to speak there.

He will make an address on Monday in Auschwitz where survivors are to hold centre-stage at ceremonies honouring the six million European Jews killed in the Holocaust.

For some, nightmarish memories of the camp are still vivid, more than seven decades on.

German soldiers "only had to point one finger at you to send you to the gas chambers", says Auschwitz survivor Bronislawa Horowitz-Karakulska, 88, a Polish-Jew who was imprisoned there as a 12-year-old with her mother.

"Whoever looked weak, skinny, bony, was selected for death," said Horowitz-Karakulska, who survived after her mother bribed guards with a diamond she had smuggled into the camp.

While the world only learned the full extent of the horrors after the Soviet Red Army entered the camp on January 27, 1945, the Allies had detailed information about Nazi Germany's genocide against Jews much earlier.

In December 1942, Poland's then London-based government in exile forwarded a document, titled "The Mass Extermination of Jews in German Occupied Poland", to the Allies.

The document included detailed accounts of the unfolding Holocaust as witnessed by members of the Polish resistance, but drew disbelief and only muted reactions from the international community.

To inform the Allies, Polish resistance fighters Jan Karski and Witold Pilecki famously risked their lives in separate operations to infiltrate and then escape from Nazi death camps and ghettos in occupied Poland, including Auschwitz.

Regarded as exaggeration and Polish war propaganda, "a lot of these reports were simply not believed" by the Allies, renowned Oxford historian, Professor Norman Davies, told AFP.

Despite "strong demands" by the Polish and Jewish resistance for Britain or the US to bomb the railways leading to Auschwitz and other death camps, "the military's attitude was: 'We've got to concentrate on military targets, not on civilian things'," said Davies, an authority on Polish history.

"One of the targets that the (British) military did bomb was a synthetic fuel factory near Auschwitz" in 1943-44, he added.

Although British warplanes flew over the death camp itself, incredibly, no orders were given to bomb it.

Professor Dariusz Stola, an expert on the history of Polish Jews, echoes this assessment.

For Allied military leaders, bombing Auschwitz, or its supply lines "was looking like a humanitarian operation and they didn't want it," said the former head of the Warsaw-based Polin Museum of the History of Polish Jews.

Auschwitz-Birkenau was the largest of all Nazi Germany's death and concentration camps and the one where most people were killed. And it is the only one to have been preserved as it was when it was abandoned by the Germans fleeing the advancing Red Army.

Operated by the Nazis from 1940 until 1945, Auschwitz was part of a vast and brutal network of death and concentration camps across Europe set up as part of Nazi dictator Adolf Hitler's "Final Solution" of genocide against an estimated 10 million European Jews.

Once Europe's Jewish heartland, Poland saw 90 percent of its 3.3 million pre-war Jewish citizens killed under Nazi German occupation between 1939 and 1945.