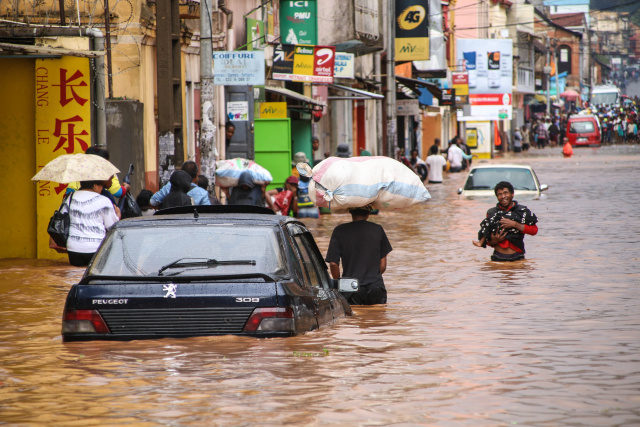 A resident walks carrying a child through floodwaters on a road in Antananarivo on January 8, 2020, after heavy rainfall.(MAMYRAEL / AFP)

A week of torrential rains have forced thousands to leave their homes, swept buildings away and cut off road links to the rest of the poor Indian Ocean island nation.

All of Marovoay’s rice paddies have turned into swamps.

"Everything has been swept away by the water," said Marie Jeanne Sofia, a 38-year-old mother of four.

"Our zebu and rice stocks have gone. The couches with their foam covers, the bed and even our mattress," she said.

"We only managed to save a few sacks of rice."

At least 32 people have drowned over the past week and 15,000 others displaced by the floods, local authorities said in their latest tally on Monday.

Sofia and her family have been surviving on fish swimming through Marovoay's flooded streets.

"Usually when I catch a lot of fish I sell them to buy rice and food," she told AFP, wading through the murky water with a net in hand.

"But here I can only catch a few, so I eat them straight away."

Madagascar, a former French colony off Africa’s southeastern coast, is in the midst of a six-month rainy season that had caused widespread damage.

Global warming has increased the risk of flooding and tropical storms, as the atmosphere holds more water and rainfall patterns are disrupted.

The government declared a state of emergency on Friday, and deployed helicopters and vessels to assist victims.

Despite these efforts, Marovoay's 20,000 inhabitants remain blocked off from the rest of the island.

Mostly fishermen and rice farmers, they float around the city on canoes and swim into their homes to rescue some belongings.

"We were able to save our bed, our pots, sacks of rice and cutlery," said 14-year-old Falimandimby Sambatra, working with a friend to pull furniture out of the water and drag it to a nearby shelter.

"All our food has gone," he told AFP. "We have nothing left. No food and no house."

Further down the road, Romaine has lost all the equipment in her copy shop.

"It is the first time this happens," said the 25-year old, who lives with her husband, children and extended family.

"The entire house has been flooded," she said. "We need to start from scratch."

"Almost all the crops have been destroyed. People no longer have work," said Patrice.

"We are making lists of people's losses and sending them to the government."

President Andry Rajoelina is expected in Marovoay on Tuesday after visiting the other northwestern regions of Boeny and Betsiboka last week.

"The state is mobilised to rescue and support inhabitants," Rajoelina tweeted on Friday.

He has promised to deliver food, care and medicines and to set up mobile clinics in the region.