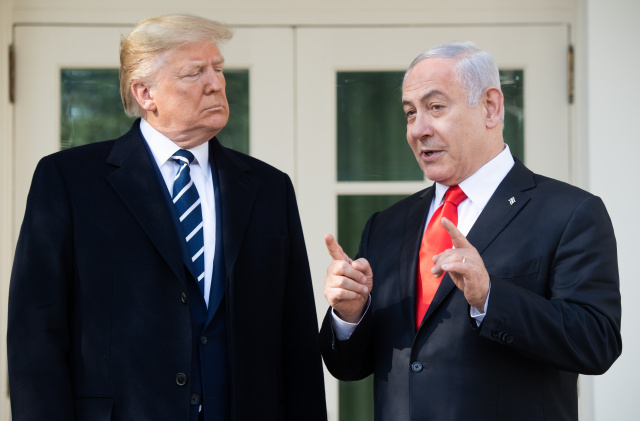 (FILES) In this file photo taken on January 27, 2020 US President Donald Trump and Israeli Prime Minister Benjamin Netanyahu (R) speak to the press on the West Wing Colonnade prior to meetings at the White House in Washington, DC. President Donald Trump on January 28, 2020 will ignore accusations of pro-Israeli bias -- led by the Palestinians themselves -- and unveil what he says is a peace plan that can solve the Israeli-Palestinian conflict. Long held secret, the plan will finally be aired jointly by Trump and visiting Prime Minister Benjamin Netanyahu at the White House.(SAUL LOEB / AFP)

(AFP) - President Donald Trump on Tuesday unveiled his long-awaited plan for the Middle East that staunchly backs Israel but offers the Palestinians a pathway to a limited state.

Here are some of the major points of Trump's plan, which he presented at the White House alongside Israeli Prime Minister Benjamin Netanyahu and which the Palestinian leadership quickly criticized.

Trump's plan will give around 30 percent of the occupied West Bank to Israel, which will have full sovereignty over the strategic Jordan Valley.

Hours after the US green light, Netanyahu signaled he would ask his cabinet to approve Israel's annexation of parts of the West Bank including Jewish settlements.

But the plan said Israel would freeze for four years its settlement-building in areas designated for a potential state of Palestine, giving the Palestinian leadership a window to accept the proposal.

Contrary to some predictions, Trump's plan allows for an independent state of Palestine, if it is demilitarized and the leadership recognizes Israel as a Jewish state.

The plan rejects any dealings with Hamas, the Islamist militant organization that runs Gaza, and says Israel will not implement any deal unless the Palestinian Authority "or another body acceptable to Israel" has full control of the impoverished territory.

Trump, who defied international consensus in 2017 by recognizing hotly disputed Jerusalem as Israel's capital, said that the holy city would remain "undivided" as capital of the Jewish state.

The plan acknowledged the Palestinians' desire for a capital in "eastern Jerusalem" and said it could be established in areas including Abu Dis, a Palestinian village adjacent to Jerusalem that is physically separated by an Israeli barrier.

The White House said Jerusalem should be recognized as Israel's capital -- most countries maintain their embassies in Tel Aviv -- and suggested that the Palestinian capital be known internationally by Jerusalem's Arabic name Al Quds.

The proposal does not change the status of the Islamic, Christian or Jewish holy sites in the city.

The White House promises that a future Palestinian state would be developed with bridges, roads and tunnels, including a high-speed corridor that links the West Bank and Gaza over Israeli territory, and enjoy a free-trade agreement with the United States.

The Palestinians would also enjoy access to two Israeli ports, although Israel would retain control of the waters.

Trump's son-in-law and advisor Jared Kushner already unveiled an economic component of the plan in June in Bahrain, with promises of $50 billion of investment in the Palestinian territories and its neighbors.

The Palestinians boycotted the presentation, calling it a way to buy off their political aspirations.

- No right of return for refugees -

The plan would end any hope of returning to what is now Israel by millions of Palestinians or their descendants who fled or were forced out when the Jewish state was created in 1948.

The plan would integrate some Palestinian refugees, the number subject to Israel's agreement, in the future Palestinian state.

Others would stay in Jordan or other neighboring countries where they have long lived or be settled around the Islamic world.

The United States would back a fund to compensate refugees, while the UN body for Palestinian refugees, to which the Trump administration has stopped contributing, would wind down.

The United States and Israel hailed support for the plan by Gulf Arab states, which do not recognize the Jewish state but are united in concerns about Iran.

The United Arab Emirates praised the plan as an "important starting point" for peace talks and, along with Bahrain and Oman, sent its ambassador to the announcement.

But Egypt and Jordan, the two Arab countries to have made peace with Israel, were not present, and Jordan said an independent Palestinian state had to be based on borders before the 1967 Six-Day War.

General » Be a reporter: Write and send your article » Subscribe for news alert
Tags: Israel, politics, US, diplomacy