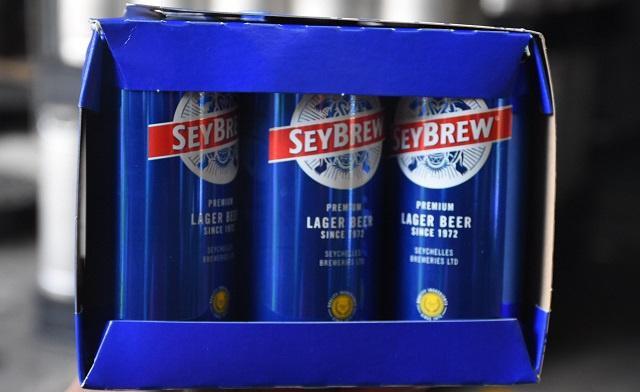 The nine-pack beer in cans instead of glass bottles has been welcomed by retailers. (Seychelles Nation)

(Seychelles News Agency) - Seychelles' favourite brand of locally produced beer -- SeyBrew -- will be available in cans in the first week of February, the Seychelles Breweries unveiled on Tuesday.

The managing director of the oldest brewery in Seychelles, Nick Cook, told reporters that the beer is being freshly brewed in Seychelles and due to the fact that it is being served in a can, it is more suited to various consumer occasions in the island nation.

"This is reflected in competitor format analysis where a higher proportion of sales are derived from can format even though cans are sold at a higher price compared to bottles," said Cook.

SeyBrew, which is the flagship brand of the company, was produced for the first time in June 1972. It is considered as the favourite beer of Seychelles. The beer is brewed with the finest malt and hops imported from Europe, Australia, and South Africa.

The launching of the SeyBrew can will be followed with Coca-Cola, Fanta and Sprite in cans as well.

Cook said that the SeyBrew can will not replace those in glass bottles as many people still prefer the green glass bottle.

For his part, the finance minister, Maurice Loustau-Lalanne, told reporters that producing the beer in the can will cost the company less and that the taste will not change.

"Many people think that serving beer in a metal can changes its taste, but I want to reassure the public that this is not the case at all with this new packaging of our local beer," he said.

The company's managing director said that the nine-pack beer in cans instead of glass bottles has been welcomed by retailers.

"The can format is also favoured by various key on-trade retailers, given limited storage capacity. Only having Seybrew available in returnable crates constrains space and acts as a barrier to distribution for current and future innovations," said Cook.

He added that the new products come at an opportune time as the Seychelles Breweries has plans to export the SeyBrew beer to three countries: Australia, the United Kingdom and Germany.

Seychelles Breweries Limited was established in the late 1960s and is part of the United Kingdom-based company Diageo.