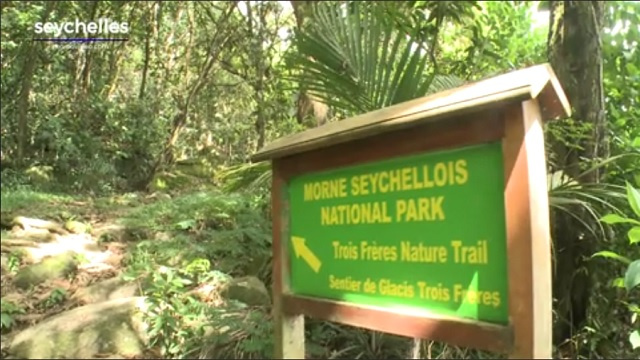 The Morne Seychellois National Park is situated on the island of Mahe, the largest island of the Seychelles archipelago (seychellespromo.com)

(Seychelles News Agency) - A new research project in Seychelles aims to establish the benefits of the Morne Seychellois National Park and the best approach to managing it.

“We are trying to get the social science perspective for the future of the national park as there are a lot of challenges as Seychelles is a growing country,” said Michael Zehnder, one of the students from ETH Zurich.

The study is a partnership between the Zurich ETH and the local project Ecosystem-Based Adaptation to Climate Change in Seychelles (EBA).

It is aimed at providing evidence from social and natural science perspectives for future management of the Mare aux Cochons watershed - one of the largest sources of potable water on the main island - and the wider area of the park.

The researchers are investigating the local perception of the Morne Seychellois National Park, preferred future scenarios for it, threats by invasive species and forest restoration at Mare aux Cochons.

The Morne Seychellois National Park is situated on the island of Mahe, the largest island of the Seychelles archipelago. It covers an area of approximately 3,045 hectares, more than 20 percent of Mahe and made up of a mixture of mangroves, untouched forests and tall mountains.

The park is 10km in length and equipped with an extensive trail network, covering more than 15km. The national park is one of the richest key biodiversity areas of the islands - where most of the endemic flora and fauna are found. It runs through three districts Belombre, Bel Air and Port Glaud.

“Research is made up of two components; one is a forest baseline inventory and the other is a social survey,” explained Maria Monthy, research assistant for the EBA project.

According to Monthy, the forest baseline inventory is long-term monitoring that will involve the community on how to maintain the Mare aux Cochons natural park.

"While the survey will focus on public opinion of locals and tourists on Morne Seychellois and what are the acceptable activities that can be conducted in the national parks" added Monthy.

The social survey will cover ten districts on Mahe and Lafleur highlighted that it will be helpful in educating locals on the importance of the park.

“During the activity, we will identify which activities are perceived to be acceptable in the national park, and how we could implement them. Your inputs are crucial for a holistic understanding of the future of the national park and will be used in the master’s thesis,” said Lafleur.

The project began in January and will go on until mid-February and once completed the team will work on the protocol of the forest baseline inventory.
.