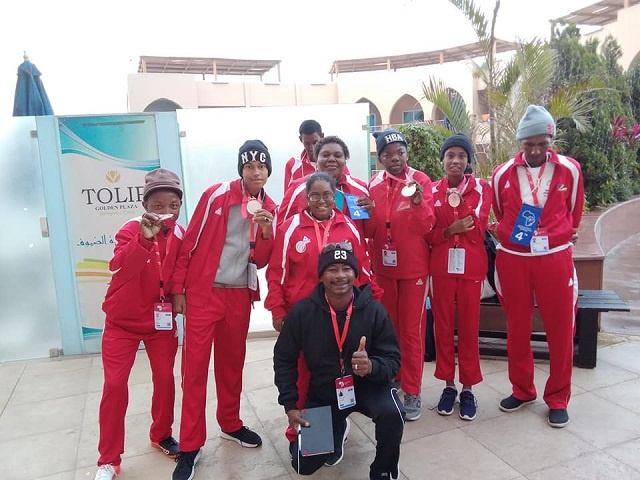 Seychelles won a total of 18 medals: six gold, six silver and six bronze, with all Seychellois athletes winning a medal though for some as part of a team.

Five out of the six gold medals came in the athletic events. The top gold medallist is Maggie Estico with two gold medals -- one in the 100 metre-race and the other in long jump.

The other gold medallists are Rosie Corallie and Regis Duval, both in shot put, Jennifer Romain in the 50-metre race and the Seychelles double team with Leonard Morel and Faisel Athanase in bocce.

Speaking to SNA via WhatsApp, the head of Team Seychelles, Helene Ernesta, who is also the national director of the Special Olympics in Seychelles said, "I was not expecting them to do so well as some had not followed our training and just started a couple of weeks before we came to Egypt."

The result was especially surprising as 18 out of the 20 athletes in the team from Seychelles, an archipelago in the western Indian Ocean, had never participated in an international event before.

"This was not only their first time but the athletes qualifying time were sent in advance and they all had to go through divisioning," said Ernesta.

Divisioning allows all athletes participating in any Special Olympics Games the opportunity to compete on an equal playing field. It is a fundamental rule which matches athletes up with others of the same gender, around the same age, and most importantly of the same competitive ability

Ernesta added that in general the game was not bad but there is room for improvement since this was the first time the Pan African Games for Special Olympics is organised.

The purpose of the Pan African Games is to provide a high-quality sports experience and engage key influencers and communities to help create positive attitudes and bring about permanent change towards the inclusion of people with intellectual disabilities throughout the continent of Africa.

Team Seychelles is expected back in the country on Saturday.