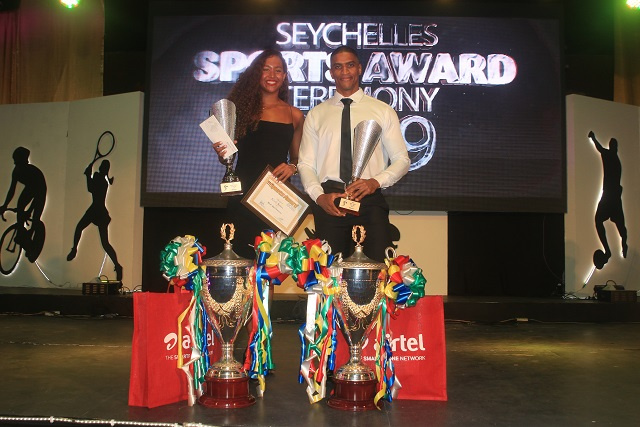 (Seychelles News Agency) - Sailor Rodney Govinden and swimmer Felicity Passon are the Seychelles' Sportsman and Sportswoman of the Year 2019.

The two athletes were crowned as Seychelles' best on Friday evening in the 36th edition of the Sports Awards ceremony at the NSC Hall in the central district of Roche Caiman.

This was the first time that the 20-year-old Passon won the coveted Sportswoman of the year title which she said is a dream come true.

"Ever since I was little when I saw all the pictures of the best sportsmen of the year it was something I wanted to achieve. I knew that for 2019, I've worked enough to fight for the title," Passon told reporters.

She added that 2019 was a good season for her although it was a bit difficult at the beginning "but after the Indian Ocean Games everything came together as I worked and trained hard."

As for Govinden, 35, this is his second title as Sportsman of the Year.

He said that this time "winning the title is a special one as I have qualified for the Olympic and for me this is a big achievement which is a result of my hard work and I am proud of the efforts I made."

Govinden who is a Laser specialist is the first Seychellois athlete to qualify for the 2020 Olympic Games in Tokyo, Japan which starts on July 24 and ends on August 29. He earned his Olympic spot after winning a gold medal at the 2019 African Championship RSX and Laser.

The Sportsman and Sportswoman award ceremony is an annual event which recognises athletes who have excelled in their sports discipline in Seychelles, an archipelago in the western Indian Ocean. The athletes are selected first as the best in their respective disciplines by their federations and associations.

The winners of the titles walk away with a cup presented by the President of Seychelles, Danny Faure, a cash prize of $1,825 (SCR25,000) and other prizes from various sponsors.

There were awards for the male and female junior athletes won by tennis player Damien Laporte and weightlifter Joelita Coloma.

In her address, the Designated Minister, Macsuzy Mondon who holds the sports portfolio said that 2019 "has been a remarkable year for Team Seychelles and tonight is a fitting occasion to highlight our achievement. At the 10th Indian Ocean Island Games in Mauritius, Seychelles came out 4th with 111 medals, 28 gold, 32 silver and 51 bronze.

Mondon said that "sports is an important part of our nation building process which has inspired us and build a sense of pride among our people. Our Team Seychelles embodies the values that represent our society is determination, teamwork, a relentless pursuit of excellence and demanding commitment to give their best for themselves and for their country."