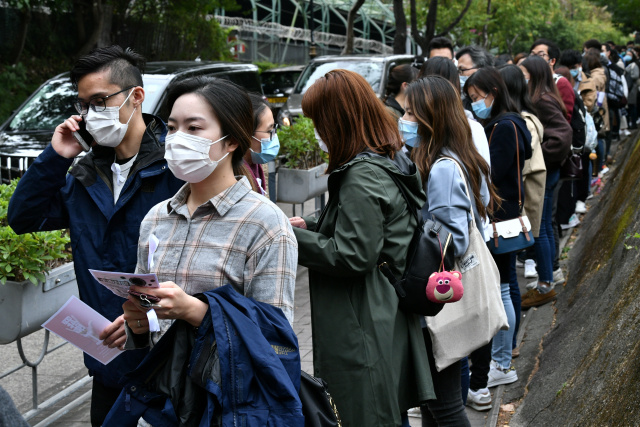 Staff members of Hong Kong's Hospital Authority, which employs 75,000 people citywide, queue up to sign a letter of petition in support of a planned strike by hospital workers in Hong Kong calling for the full closure of border crossings from mainland China on February 4, 2020. Hong Kong on February 3 announced it was closing all but two land crossings with the Chinese mainland to slow the spread of the deadly new coronavirus as medics staged strikes calling for the border to be completely sealed. (Anthony WALLACE / AFP)

(AFP) - Two more cities in China's eastern province of Zhejiang have restricted the movement of residents over fears of the spread of the coronavirus, far from the epicentre of the health emergency.

The city of Taizhou and three Hangzhou districts -- including the area home to the main office of Chinese tech giant Alibaba -- will only allow one person per household to go outside every two days to buy necessities, city officials said.

The areas between them account for more than nine million people.

Taizhou -- 850 kilometres from the epicentre in Hubei province -- will also suspend 95 train services into the city from Tuesday.

In addition, all residential communities must only keep one entrance open and residents must present ID each time they come in and out, according to a statement on Taizhou's government's official WeChat account.

Landlords were also forbidden from renting property to people from "severely affected areas such as Hubei" if they had travelled to their hometowns recently, it added.

The latest restrictions follow similar measures announced Sunday in the Zhejiang city of Wenzhou, which has a population of nine million people.

The city has restricted the movement of residents and closed roads.

Zhejiang province has confirmed 829 cases -- the highest number outside central Hubei province, the epicentre of the outbreak which has claimed 425 lives.