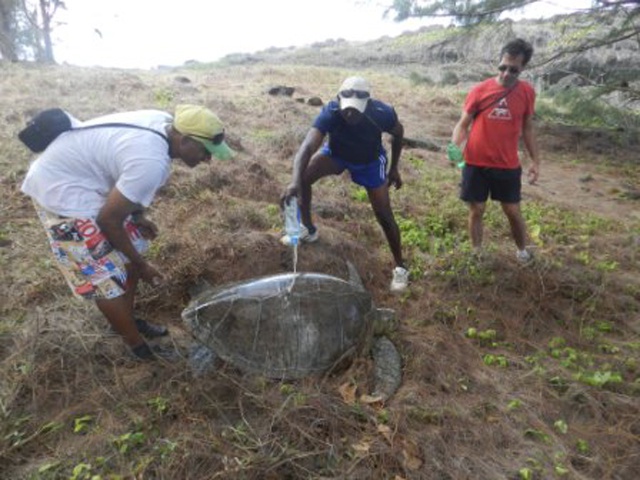 (Seychelles News Agency) - A French couple holidaying on the Seychelles island of Silhouette has been hailed as conservation heroes by a local NGO after they came to the rescue of a green marine turtle in difficulties this week.

The troubled turtle was stranded at ‘Ramasse Tout’, above ‘Anse Cimitière’ on the mountainous Silhouette, the third largest island in the Seychelles archipelago of 115 granitic and coralline islands, situated some 30 kilometres from the main island of Mahé.

The Island Conservation Society posted the story of the turtle’s rescue on their Facebook page on Monday, describing how the tourists, Nicolas and Carolina LeClerc, alerted the ICS team after Carolina spotted the nesting mother turtle struggling in the remote bushy area.

In an email interview with SNA, the conservation officer leading the small ICS team on Silhouette, Angela Street, described how she and Nicolas kept the mother hydrated by pouring water over her head and carapace while waiting for two ICS rangers to arrive. The rangers proceeded to gently drag the heavy turtle, who was too weak to walk on her own, down towards the beach, where she entered the water unassisted and swam away to safety.

Although Street said the turtle will most certainly recover, she may well have died of dehydration if it had not been for the help of her rescuers.

“The turtle's energy reserves were exhausted. She may have been on land for 16 or more hours and her track through the bush was incredibly long and winding. She also got a bit torn up in the process, with some small cuts on the outer edges of her carapace.”

The intrepid mother-to-be was unable to find a place to dig a pit to lay her eggs in, explained Street, as the beach where she landed is littered with rocks and peters out into scrub brush surrounded by hard, compacted soil.

Nevertheless, Street said she toiled on, trying again and again to locate a piece of ground soft enough to dig her pit in, but without success.

To the best of her knowledge, Street says this sort of incident is not very common on Silhouette Island.

“We have had to rescue nesting sea turtles before, but never at Ramasse Tout/Anse Cimitière, and never so far away from the sea,” she explained. “Moreover, in the past year I haven't come across any adult turtles who were too exhausted to walk, although I have found the odd turtle who was trapped by roots, branches and so on.”

Street said the turtle has likely already returned to lay her eggs on Silhouette.

“Females can hold onto their eggs for several days, and make repeated nesting attempts. But, if after all that they are still unsuccessful, they will drop their eggs in the sea.  Usually, however, it doesn’t come to that,” she added.

Street, who hails from Nova Scotia in Canada, explained that green turtles, listed as endangered on the IUCN’s red list, are a rarer find on the inner islands of the Seychelles than hawksbill turtles, which is the only other variety of marine turtle that nests within the archipelago. On the outer islands however, Street says the green turtle is a far more common find than the hawksbill.

Both varieties travel long distances, in many cases thousands of kilometres, to return to the very same beaches where they themselves were hatched in order to lay their own eggs and repeat the life cycle.

What to do in a similar situation

If a member of the public finds a turtle in distress, Street advises them to contact ICS to find out if they can assist, either by sending out rangers or giving telephonic advice on how best to help the animal.

“If an ICS staff member is not available and a turtle is trapped by roots, branches, etc., we would encourage people to cut her loose – she will in all likelihood return to the sea on her own,” she said.

If a turtle is found in the state that this one was found in, we would suggest hydrating her whole body (head, flippers, and carapace), and then wait and see if she can make it to the sea on her own,” said Street, adding that this was the best case scenario.

“In those rare instances where the turtle is too weak to walk, you can try turning her upside down and dragging her to the sea by her front flippers, as the carapace will slide nicely in the sand. But only try this if the turtle is already on the beach,” she warned. “You need to make sure the head is protected and you will need at least two people, and preferably more, for this operation.”

The ICS maintains a presence on the Seychelles islands of Aride, Silhouette, Desroches and Alphonse and can be contacted at the Silhouette Conservation Centre.