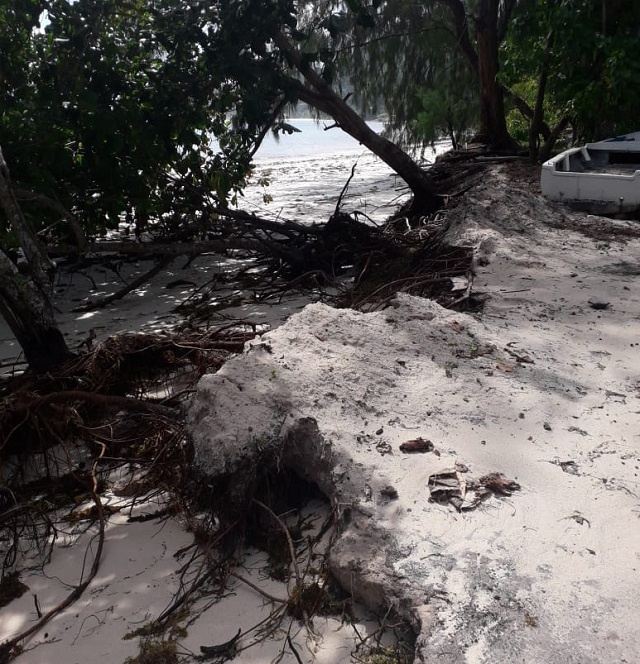 Severe coastal erosion taking place along Seychelles’ coastline because of climate change and infrastructural development is forcing the authorities to come up with measures to remediate the situation, said a top official.
The senior climate adaptation officer at the Ministry for Energy, Environment and Climate Change, Annie Simeon, told SNA last week strong waves and sea-level rise from climate change are affecting the coast.
“This has forced the authorities to come up with several measures in line with the geological aspect of the different areas affected,” said Simeon.
Seychelles, an archipelago in the western Indian Ocean, experiences high tides of 1.5 metres up to 1.6 metres during times when there is no full moon. Only last year, the islands experienced high tides of 1.9 metres, even up to 2.1 metres in January, which Seychelles Meteorological Authority described as critical.
Data from the United Nation’s Intergovernmental Panel on Climate Change predicts that sea level will rise by 50 to 100 cm by the year 2100.
“We are getting these problems because most of our main roads are coastal ones and the more the beach degrades, the more it erodes the areas under the coastal roads. We are predicting that in the future we will be getting more cases and our main plan is to increase the distance between the area where the water breaks and the road,” explained Simeon.
Simeon said that one of the main measures being used to remedy the situation is the sea wall, timber piling, and rock armouring, which are not favoured by the public.
One softer rehabilitation measure being undertaken is tree planting, which is more environmentally friendly.
A critical area that has been affected which now has rock armouring as a remedy is a road along the coast of Takamaka, a district in the southern part of the main island of Mahe.
The project to rehabilitate the area started late last year and is expected to last for another few months. The project being spearheaded by the Seychelles Land Transport Authority (SLTA) and the Ministry of Finance costs is around $219,000.
Jean Claude Labrosse, principal climate adaptation officer of the ministry, said, “this area was a number one priority for us as the road was degrading very fast leaving some utilities exposed. We needed to move in very fast with a project that would stabilize the area and prevent the place from being eroded.”
The other reason why certain places are being eroded with high tides and waves is the way infrastructural development is being done along the coast.
The La Plage Restaurant which is a business located along the coastline of Beau Vallon Beach is feeling this effect.
Speaking to SNA, the owner of the restaurant, Arthur Fourcroy, said that the waves have gradually removed almost all the sand underneath the part of the building touching the shoreline.
“We are doing all we can at our own expense to save not only our business but a historical building that has been there for a long period of time. A lot of people have memories in this place,” said Fourcroy.
Simeon said that the authorities do not really intervene in cases where it concerns only one family, individual, or business.
She said that the individual needs to take matters in their own hands, but should seek guidance and approval from the authorities before undergoing any development.
At present, the government has a policy that allows infrastructures to be built only 25 metres away from the coastline.
“We need to take into account the severe adverse effect coming from the sea that will affect our development. If we are in a position that we need to set back our development, please do so. The more we protrude towards the sea, the more we would suffer the impact of erosion” said the principal officer of the climate adaptation department.
Another place where the authorities are conducting work to prevent erosion is in the western district of Anse Boileau, where a seawall has been built to tackle flooding during high tides and heavy rain in the area.
The project, which is being implemented in two phases is to prevent seawater from ending up on the road by restoring the existing, crumbling wall.
Rocks on the site are being used as a base for the infrastructure, which will later be buried under the sand. The wall is being built at a height that will prevent water from reaching the road during high tide. The sand dune, onto which coconut trees and coco-grass are being planted, creates distance between the road and water breaks.
The team is also working on a project at Anse Gaulette, in the district of Baie Lazare. The beach close to Lazare Picault Hotel had the same problem where water would flood onto the road and all the trees are exposed.
Simeon explained that though access to the beach is public, the beaches are still on private lands and permission from owners are required to carry out any development, thus, posing some difficulties at times.
Environment » Be a reporter: Write and send your article » Subscribe for news alert
Tags: Intergovernmental Panel on Climate Change, Seychelles Meteorological Authority, La Plage restaurant