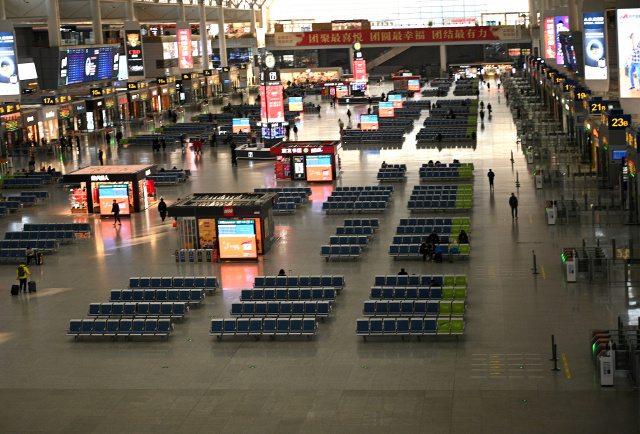 A general view shows the usually full Hongqioa train station in Shanghai on February 5, 2020. The world has a "window of opportunity" to halt the spread of a deadly new virus, global health experts said, as the number of people infected in China jumped to 24,000 and millions more were ordered to stay indoors. (Noel Celis / AFP)

(AFP) - China's struggle to contain the deadly coronavirus is deepening concerns about the impact on the world's number-two economy, as factories stay closed and millions of consumers remain holed up at home.

The epidemic, which has killed hundreds and infected more than 24,000, has led to sweeping travel restrictions across the country as well as the closure of popular tourist attractions, businesses, schools and entertainment venues.

Central Hubei province -- at the epicentre of the outbreak -- has effectively been locked down since late January with other cities imposing restrictions this week in the eastern industrial belt, including the home of tech giant Alibaba.

Now, economists are warning of a bruising first quarter for the already stuttering economy -- and potentially a severe hit to full-year growth -- after a ruined Lunar New Year holiday, with some saying it could prove more painful that SARS.

"The inopportune timing of the outbreak around Chinese New Year, a time of increased transport and economic connectivity... as well as the lockdown of affected regions all add to the equation," said Louis Kuijs of Oxford Economics.

The crisis also comes as Beijing battles to kickstart growth after a drawn-out slowdown caused by weak overseas demand and the US trade war, and there are building concerns a hit to China could have a domino effect globally.

Moody's analysts said the virus was "a serious mounting threat to the fragile Chinese and global economies", adding that there are "no good scenarios".

Many factories closed for the Lunar New Year break have delayed reopening -- exceeding a three-day extension of the holiday that authorities imposed to prevent large public gatherings.

Manufacturing accounts for around a third of China's economy and the auto industry is set to take a sharp blow, given that Hubei's quarantined capital, Wuhan, is among China's largest production bases.

A Ford spokesman told AFP production would resume around next week, but said the epidemic has already "suppressed or delayed consumer purchases to a large degree".

Dongfeng Motor Corporation, which is based in Wuhan and is one of China's biggest auto groups, said its reopening "will depend on the prevention and control of the epidemic".

Ratings agency S&P has predicted the delay in opening factories could hit car production by up to two percent and warned the real impact may be larger as workers could potentially shun Hubei when called back to work.

Oxford Economics believes the virus could knock at least two percentage points off China's growth in the first quarter before seeing an improvement in April-June.

Still, it cut its full-year outlook to 5.4 percent expansion -- markedly down from its previous estimate of six percent, which was in line with 2019 and the slowest in three decades.

However, the biggest hit to the economy is likely to be from China's army of consumers saying at home, observers said, with Moody's analysts expecting spending on transportation, retail, tourism and entertainment to be hammered.

Domestic travel revenues clocked in at more than $73 billion, it said, as people travelled across the country to visit family, while the Forbidden City hosted nearly half a million visitors.

But this year, shopping malls, eateries, cinemas and transport hubs were quiet, while the Forbidden City was closed.

Big-name high-street titans are also feeling the strain. Nike and clothing giant H&M have both closed half their stores in China, with the Swedish firm telling AFP a "short-term impact on sales is inevitable".

Jewellery chain Pandora said there had been "an unprecedented decline in consumer traffic in China and Hong Kong".

Apple and Starbucks have also shut down outlets.

Passenger volumes on air, rail, road and water transport plunged more than 70 percent from a year ago.

Analysts at Allianz and Euler Hermes warned the economic impact could surpass the SARS epidemic because private consumption is now a much more important driver of economic growth than in 2003.

While authorities have stepped up to provide support -- the central bank has pumped more than $200 billion into financial markets this week -- Moody's analysts said the full benefits are "unclear" for now.

"Given the high levels of uncertainty, consumers may simply save the spending they had planned for the Lunar New Year holiday, and could spend more cautiously in general," they said.

ING economist Iris Pang added that with the central bank having done its part to avoid "market chaos" -- Shanghai equities have clawed back some of Monday's near-eight percent rout -- government fiscal stimulus is next on the cards.

Beijing has already been spending on rapidly building hospitals in Wuhan, and eased import duties and consumption tax on medical equipment.

But experts warn of a larger spillover effect on supply chains, with DBRS Morningstar noting China makes up 17 percent of global GDP, while a growing list of nations banning flights to and from the country will have a huge impact on their tourist sectors.